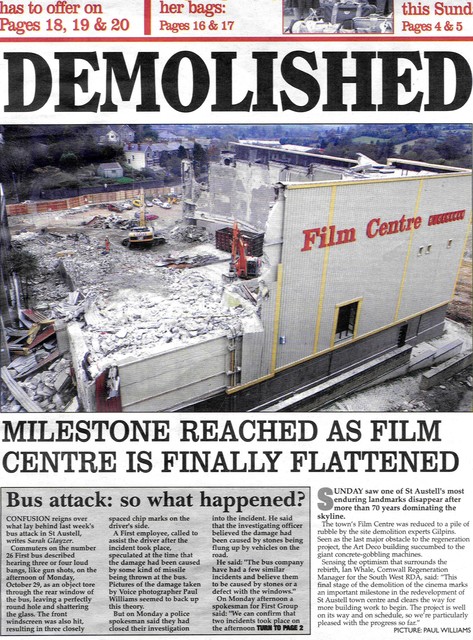 A magnificent building, both the exterior and interior were stunning. It first opened on 11th July 1936 as the Odeon, part of the Oscar Deutsch ‘Odeon Theatres’ chain. The programme for the opening week was Errol Flynn in “Captain Blood”. Seating was provided for 806 in the stalls and 468 in the circle.

The exterior was dominated by a slender fin tower feature over the entrance and inside the auditorium there was a simple Art Deco styling with a plain ceiling which was illuminated by a trough which surrounded along the walls.

The Odeon was taken over by Classic Cinemas from 10th December 1967 and re-named Classic Cinema. From 8th January 1978 it was taken over by an independent operator and re-named Film Centre. It was converted into a triple screen operation in April 1981 with 605 seats in the former stalls and two screens in the former circle each seating 125 and 138. In May 1991 the rear stalls area was divided into two screens, each seating 70 persons.

The Film Centre was closed on 23rd August 2007 due to a new purpose built 4-screen cinema which was planned to open in the town in late 2008 or early 2009. It was demolished in October 2007 to make way for a new town centre development.

Some more vintage photographs of the Odeon St. Austell and other St. Austell cinemas here:
http://www.albanyward.com/St_Austell.html

Wonderful shots of the Odeon-that-was Ken! All the more sad that ‘progress’ dictated conversion to an every day soulless multiplex.
Many thanks …… Ian W in far away Melbourne!

Hello, Firstly, what a fantastic site, please keep up the brilliant work. I am writing to amend a couple of errors that appear in your listing for the Film centre/Odeon, Chandos place, St.Austell, Cornwall, England. The opening date was Saturday 11th July 1936 (not 1937), and the 1st film shown was a charity screening of â€˜Jack of all Tradesâ€™. As a matter of interest, the last film shown on its closing night Thursday 23rd August 2007, was again a charity screening of â€˜The smallest show on Earthâ€™. This magnificent building, in my opinion the finest example of itâ€™s type is currently being stripped out in preparation for destruction, which should occur in the next 4-5 weeks (Mid Oct 07). Whilst the building would have benefited from refurbishment and investment, the money has gone instead to build a new, no doubt glass and chrome anytown cinema in the town, the â€˜replacementâ€™ cinema is not to be completed until 2008/09, not a as stated in the listing â€˜about to openâ€™. Thanks again, wonderful work.

Hello again. Just an update to advise that the demolition of ‘our’ beloved Odeon-Classic-Film Centre, Chandos Place, St.Austell, Cornwall, Is now complete (28/11/2007). The walls came down a few weeks ago (3-7/11/2007, and site clearing and removal of foundations, drainage etc have been undertaken these past few weeks. It upsets me to even talk about it, let alone to have had the misfortune of having witnessed some of it’s destruction. St.Austell will now get in the next 18 months, a 4 screen (1 less than the Odeon), 600 seat (half as many) anytown sterile cinema, and future generations will be denied the privilege of experiencing the glamorous splendour and
magnificent architecture of this beautiful and imposing Art Deco building.

To mikero and others, sadly the demolition of the Film Centre/Odeon/Classic was necessary, as the attached multi story car park had ‘mundic block’ and was pulling the cinema down along with it… when this was realised, it was too late to save the cinema.. the next best thing is a new cinema, which at least WTW Cornish Cinemas has ensured by building the White River.

This week, would have seen us celebrating this magnificent buildings 80th Birthday on the 11th of July. It maybe gone, but will never be forgotten.