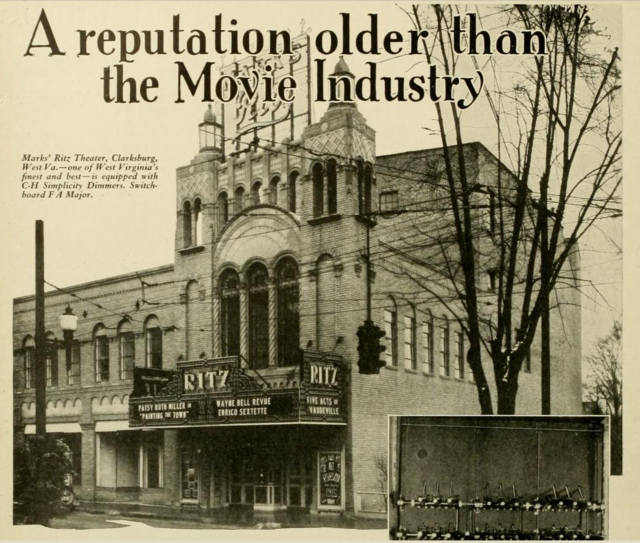 The Clarksburg-Harrison Public Library, which was built in 1975, sits on the site of the Ritz Theatre.

The March 26, 1973, issue of Boxoffice announced the intention of the Clarksburg Library Board to condemn the Ritz Theatre and adjacent private buildings in the 400 block of West Pike Street. The last operator of the Ritz was Russell Lopez.

The July 23 issue of Boxoffice said that the Ritz had closed, and that it had been the only theater in Clarksburg showing Restricted films. Madge Stout at the Robinson Grand must have been running a strictly G and PG house (I don’t think PG-13 had been added to the rating system yet.)

An item about the demolition of the Ritz Theatre appeared in Boxoffice, January 7, 1974. It said in part: “The theatre was built 46 years ago by the late Jack Marks, one of the Mountain State’s pioneer exhibitors, but he never operated the Ritz, transferring the new, unopened theatre building to Warner Bros. Theatres. A city
which at one time had five theatres, Clarksburg now has only one, the Robinson Grand.” The Ritz must have opened about 1928.

Marks' Ritz was a splendid little theater. A photo of the front illustrated an ad for Cutler-Hammer dimmers in the October 6, 1928, issue of Motion Picture News. The somewhat eclectic facade was predominantly Spanish Renaissance in style.