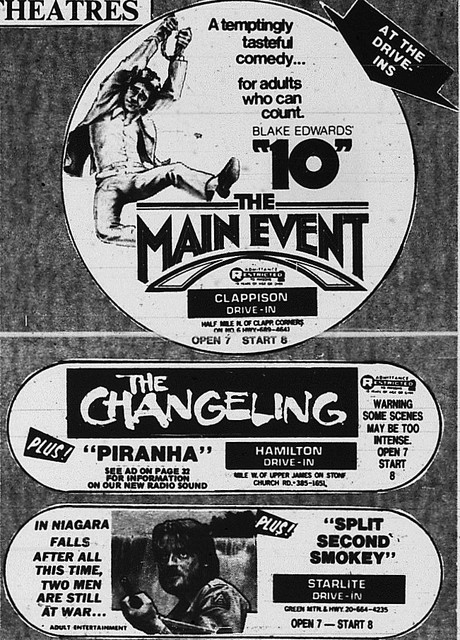 The Clappison Drive-In was located near Highway 6, just 1 mile north of Highway 5 on Parkside Drive. It opened in 1959 and closed in 1985.

Windsor Drive-In Ltd. owned this drive-in, which had space for 930 cars.

I remember going to this drive-in in 1985. It was being leased by Cineplex-Odeon at the time. The snack bar was very plain, and the picture was not as clear at the other drive-in in Hamilton called the Starlight located in Stoney Creek. One thing I remember is the lot. It was gravel, but it was covered in weeds that were 2 feet high! Cineplex-Odeon didn’t renew the lease for the ‘86 season because they were not into operating drive-in theatres. Judging from how the Clappison was being operated, this was obvious.

I remember wanting to go here when I was a kid but never did.We used to drive by it on Highway 6 going back towards the 401 on a Sunday nite after leaving my grandmothers place in Hamilton.I was fun trying to figure out what movie was playing.These memories go back to the early and mid 70’s for me.

I lived in Waterdown from 1965 to 1974. I remember heading over to the Clappison drive-in during these years, hopping the fence to take in the show. I decided to take a trip back to it in 1990, after it was abandoned, with video camera in tow. I’ve just posted a YouTube video that’s an edit of the raw footage I shot. I hope historians and other interested parties will enjoy the video. You can find it here: http://youtu.be/rLN3w5EMoqU . Cheers and take care.

Here is the video

A newspaper in 1959 indicated that the theatre had opened just that year, but since I have seen the grand opening ad for the Clappison back in 1951, I think that the actual opening is a tad out.