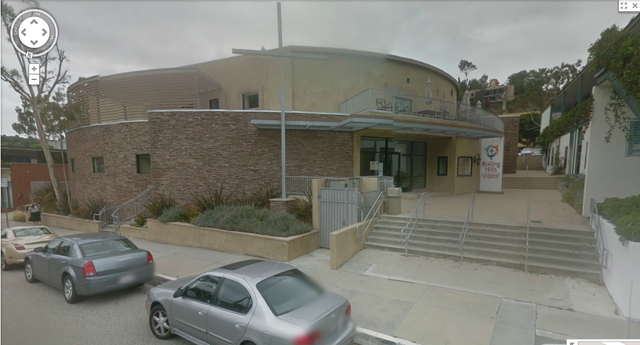 This was a beautiful modern theatre with a huge screen when it opened on August 7, 1963 with Doris Day in “The Thrill of It All”. It was twinned on November 22, 1972 with one small house and one larger one. It was a very cheap job and theater 2 didn’t even have curtains.

After closing the theatre was used as a skating rink, and it is now a church. The same man managed this theatre from opening to closing.

Memories of the FOX-Palos Verdes {735 Silver Spur Road, RHE, CA 90274) include seeing many CLASSIC MOVIES … Parent Trap {with then rising star Haley Mills} Freaky Friday, Shaggy Dog and the last movie I saw there “Snowfire”. It was the FOX from 195?-till approximately 1980 when it closed and was converted to Rolling Wheels Roller Skating Rink. I remember spending alot of time and loving Rolling Wheels and my friends and I were waiting for our rides on those stairs in the front that come up from the Silver Spur Road sidewalk. I also remember how they used both auditoriums to support the skating rink and the teal green floor over the sticky FOX theatre floor. I also remember looking up at the walls where the screens were and you could see that they were covered behind the wall of that thick teal soundproof foam and I wondered which screen was the last one that I saw SNOWFIRE the last movie I saw at the FOX Palos Verdes. Ironically I remember the same ticket window they used for the Fox Theatre they used for the skating rink admission and the snack bar remained in the same place for both the movie theatre and the rink. They converted it a little bit but obviously didn’t have to change much. I also received my first kiss at the Rolling Wheels Roller Rink after slow skating with an attreactive older woman. Then in late 1984 or EARLY 1985 it closed due to the competition placed on by then ICE CAPADES CHALET in the Courtyard Mall now the Avenue of the Peninsula. I grew up in Palos Verdes and have fond memories of this theatre but it has changed as after it went from Rolling Wheels it turned into a gymnasium, owned and operated by good friend and high school supervisor Jim Mitchell. He was the gymnastics coach at the CLASSIC PALOS VERDES HIGH SCHOOL. He owned and operated this property from when he bought it from Rolling Wheels and then changed the name to STUDIO WEST Gymnasium. He owned and operated SW from approximately 1986-1994 and then it sat idle until its current use now as a Christian Church group. The building still remains at 735 Silver Spur Road and picture of the outside can be taken but if anyone has a picture of when it was either FOX Theatre, Rolling Wheels, Or Studio West , would love to see that picture on this site. If you read this and remember and want to reminisce old times, please e-mail by clicking the hyperlink. Thanks for reading.

Thank you DASL'R and of course our unofficial historian Bruce Berns, and all the rest of you for sharing. There just has to be a movie in all this. Just as the classic Cinema Paradisio captured a time and place that no longer exists in Italy we too share the movie experience of times gone by. We have witnessed the best and the worst of times for the movie houses. And soon there will be no “projectors” of old. With digital replacing the remnants of the age of film. Bruce Berns write a screenplay please, and do you recall ANY pictures of the old projection booths? I currently live in Estes Park, Co. where we have “the oldest running movie theater west of the Misssisssippi”. And it smells that way. This theater is OLD and not grand like our beloved Fox or the magnificent San Pedro Grand it resembles an old barn which it may well have been. It’s so old that the projection room walls are covered with sheet metal in case of fire from old nitrate prints. The ancient carbon tetrachloride bulbs hanging from the ceiling still held by thin wire with a lead bond that melts in low heat and drops the bulbs releasing the fire retardent. The theater also sports an empty wood tower as a symbol of the owners empty heart after being left at the alter. I’m not making that up. Since we had our very first film fest here I’m sure the producers obtained pics and I’ll see if I can post them. View link

I hope to continue to find new posts of experiences of the days gone by in the South Bay.

I know there’s a skating rink in one of the shopping malls on Silver Spur. I was there last Christmas. Is that the theater?

Does anyone remember a triplex on Palos Verdes Boulevard just west of PCH in Redondo Beach? I seem to recall a UA theater there years ago. I walked by that area yesterday but forgot to look if there was any semblance of a theater there.

Unlike most Fox theaters of the postwar period, which were designed by in-house architects such as Mel Glatz or Carl G. Moeller, the Palos Verdes Fox was the work of Carver L. Baker, coordinating architect and planning consultant for the development company that managed almost 7000 acres of the Palos Verdes Peninsula for the Great Lakes Carbon Company, which had acquired title to the land in 1953.

An item about the opening of the Fox Theatre appeared in Boxoffice, August 12, 1963, a few days after the house opened. It includes a photo. The caption says that this was the fifth theater opened by National General Theatres, and brought the circuit to 225 theaters in 27 states.

Most of the information about National General Theatres available on the Internet is a bit confusing. The company was incorporated as National Theatres in 1952, but at that time had already operated under that name for many years, having been formed in a 1934 reorganization of Fox West Coast Theatres, which had gone into receivership the previous year, part of the collapse of William Fox’s various enterprises. 20th Century Fox owned a minority interest in National Theatres for a number of years, then acquired a majority interest in the 1940s. The 1952 incorporation was the result of a reorganization of the company stemming from the anti-trust decrees that required movie studios to divest their theater operations.

The various claims that National General took over Fox Theatres in the 1960s are thus misleading, as the company and its predecessor National Theatres had by then been running Fox Theatres for about three decades. The name change to National General in 1962 was a belated reflection of the fact that the National Theatres Corporation incorporated in 1952 had been from the beginning a diversified conglomerate, with movie exhibition only one facet of its operations. A majority of the company’s revenues came from publishing and insurance.

Does anyone have photos of this cinema? I’m a huge movie buff that grew up in PV during the 90s..would love to see what this piece of lost Palos Verdes history looked like!

The Fox Palos Verdes Peninsula theatre opened on August 7th, 1963 with “The Thrill of it all” with Ira Cook being the master of ceremonies. Grand opening ad posted. 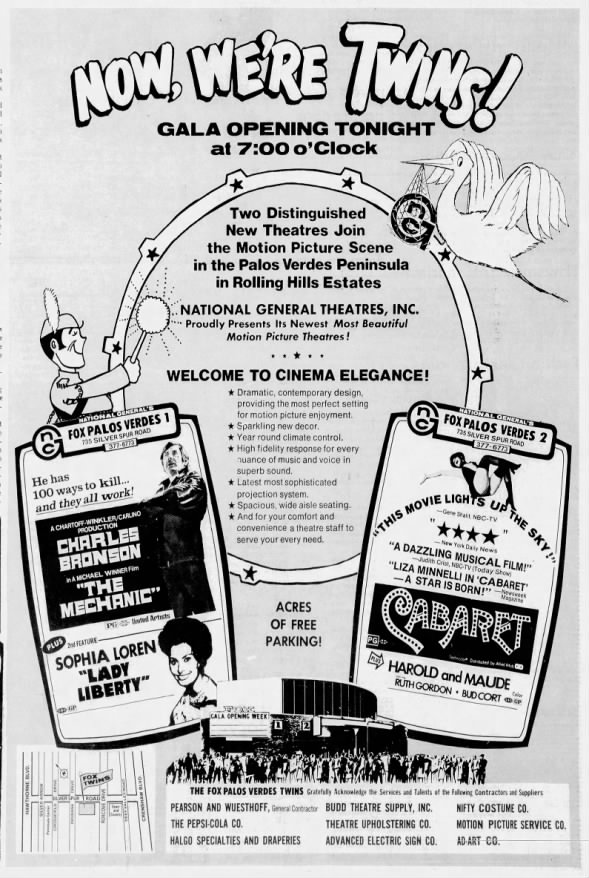