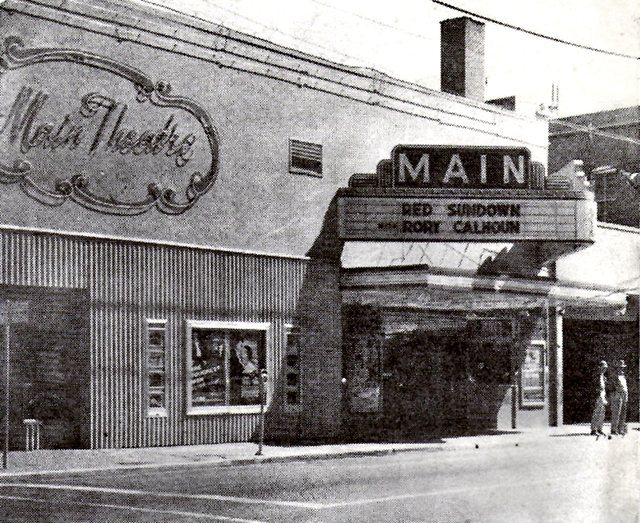 The Main Theater was one of the most lavish and popular theaters in Paris. It was a top-notch movie house built to handle overflow crowds from the more spectacular Grand Theater, which was just around the corner.

The Main, however, had its own special brand of drawing power, as epic films of the day flowed across its screen. Claude Musselman (Paris Movie Man) cut the ribbon
Friday, June 22, 1942, opening the Main for his partners, Interstate Theater Circuit, Dallas, headed by Karl Hoblitzelle.

The Main was beautiful, taking back seat to none, and Truman Riley was first manager. Cecil Burch became manager in 1954, but with the breakup of theater chains, Sam Ginsburg bought the Main in 1956.

The Main was in continious operation for over 18 years, but on Saturday April 15, 1957, the end came for the Main. A few months later, the theater was opened
as the Parisian, but was shut down for good in late 1959. The structure was demolished in 1961.

The main closed in 1957, and spent a couple years as the Parisian,
Not to be confused by the early day Parisian, which later became
the Plaza

A 1942 image of the Main Theater in Paris Texas.

An image of the Main Theater in Paris Texas from 1956.

Announcement from newspaper at View link