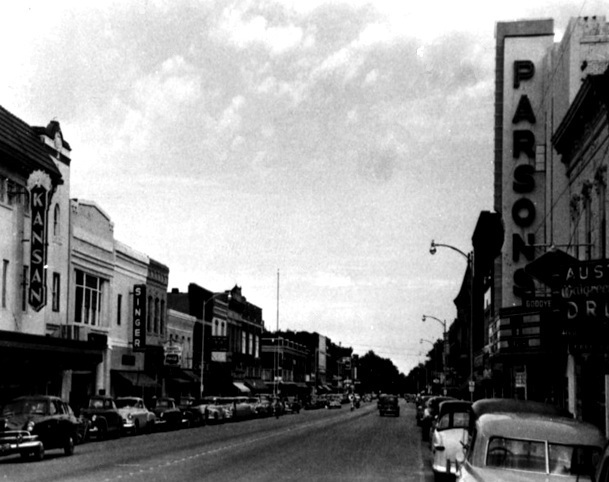 Today the town is served by a modern five-screen Parsons Cinema at a different location (which has its own page on Cinema Treasures).

The Parsons Theatre might have opened as early as 1921, when the February issue of The Bridgemen’s Magazine carried the following item: “Parsons—Theater and Office—Parsons Amusement Company having plans prepared by H. R. Primmer, architect, Nevada, Mo., for 3-story, 100 x 120-ft., reinforced concrete, steel and brick, reinforced concrete flooring, concrete foundation. About $250,000.” The building in the 1985 photo lostmemory linked to was certainly not 100 feet wide, but part of the building destroyed in the 1943 fire might not have been rebuilt.

The Parsons launched on December 17, 1941 with Robert Young in “Married Bachelor" with seating for 750 people. Shy of its third anniversary, a fire on September 23, 1943 gutted the theatre. H.J. Griffith Amusements Circuit had to get dispensation to rebuild the venue from the War Production Board. The New Parsons Theatre launched on August 31, 1944 with Lucille Ball and Dick Powell in “Meet the People.”

Commonwealth Circuit took on the location. The final operator was B&B Theaters Circuit which turned the venue into a three-plex rebranding as the Parsons Cinema. It was the 46th location for B&B. The Parsons was split on the lower floor and an upper floor auditorium was created in the former balcony. B&B discontinued a policy of late night X-rated films. Seating count for all three theaters combined was 500.

The two screens opened on December 21, 1984 still under the Parsons Theatre. The name of the theatre officially changed to the Parsons Cinema with a grand opening celebrating Screen #3’s arrival on February 2, 1985. B&B subleased to a couple who were considering purchasing and renovating the venue in November of 1998. That became moot when the theatre burned down due to a faulty furnace on December 15, 1998.

Note: This theatre opened for the first time in 1941 - not 1921. The note above correctly states that the Parsons Amusement Company (which owned the Elks Theatre as of 1918 and also the Liberty Theatre both in Parsons) did build a new theater but it was in Nevada, Missouri in 1921 (which the note also says)… not a new theater in Parsons.