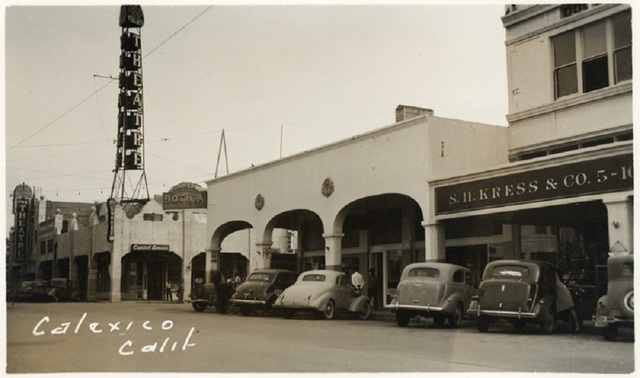 The Capitol Theatre opened in 1930 and was demolished years ago. It was a district 3 Fox theater.

The Capitol Theatre was located at 321 2nd Street.

Here is a photo:

I serviced the projection equipment in this house for Mr. Wesley “Andy” Andrews who was, I think, the last person to operate it. It was a very nice old stadium-styled house with a very nice projection booth and a really neat basement. Calexico was like stepping back a few decades into the past. I wonder what it’s like now.

I was in Calexico a few years ago. Nothing to write home about.

In the L.A. library’s California Index, I found three cards citing articles in Southwest Builder & Contractor which probably concern this theatre. The issue dates are 3/28/30, 4/25/30, and 5/23/30. The theatre was being built for Fox West Coast and its subsidiary, Valley Theatres. A Mr. Dave Croft is mentioned as being connected with the project. The only location given for the theatre is “…between Heber and Hefferman streets….” The 300 block of 2nd Street is between Heber and Heffernan Avenues, so the Capitol must be the place. The architect is not named on any of the cards, but might be in at least one of the articles, if somebody can get hold of the magazine itself.

There’s another card in the index which cites a February 5, 1932, issue of Southwest Builder & Contractor in which there’s a notice about Fox West Coast Theatres planning to “…remodel the former Rialto Theatre building in Calexico. Several stores will be added.” No location is given for this house, and the wording leaves it unclear if Fox was converting an old theatre to stores, or if stores were being added to the building and the theatre was remaining but getting a name change.

Either I was blind or inattentive last time I looked for Calexico theaters in the California Index, or the Index belched, because I now see a card there citing Southwest Builder & Contractor of 3/21/1930 which reveals that John Paxton Perrine was the architect of the theatre being built for Fox West Coast on an unspecified street between Heber and Hefferman Streets in Calexico.