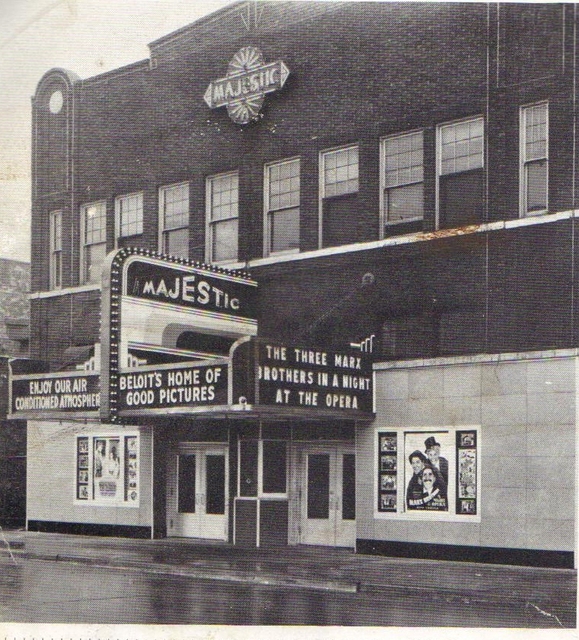 The Majestic Theater was operated by Standard Theaters in the 1950’s thru early-1970’s. The building may still be standing, but I didn’t find any businesses currently listed at the theater’s address.

Trying to confirm a personal appearance at the Majestic in Beloit in the Summer of 1948 by the Three Stooges, Moe, Larry and Shemp.
Frank Reighter

The May 6, 1944, issue of Boxoffice mentions a T.M. Ellis, operator of the Majestic, State, and Rex theaters at Beloit. It says that he began his career as an exhibitor with the Majestic in October, 1919.

Could this be the theatre mentioned in the CBS TV SHOW the POPCORN KID? I am Looking for the MAJESTIC theatre from the short lived TV series. I know i will find it. Did you ever see this series THE POPCORN KID? Sadly, it was only on for about a month before it was taken off,I think MTM tv did the one that did WKRP. OH well, I will keep looking.

I put up a photo of the Majestic from June or July 1951 on my flickr account. Dating photo from the movie that was playing, they were doing something outside for the moive Excuse my Dust. Iâ€™ll look up more info on the event later.

To “lostmemory” yes in that photo they are in the process of tearing down the theater. It is now a parking lot.

I put up two photos of the Majestic during the 70’s and about 1935. I’m so happy to have found good pictures of my old haunt :)