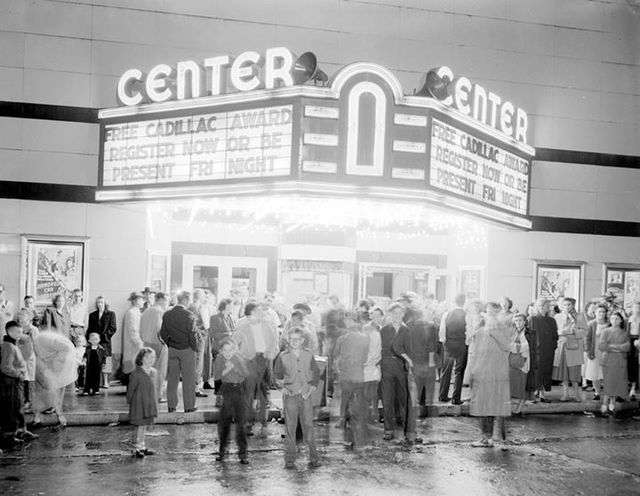 The Center Theater was opened January 26, 1948 with James Stewart in “Magic Town”. It closed as a theater in 1955. The building was used as a factory outlet furniture store for many years after.

Here is an archive photo of the Center Theatre.

The description accompanying this photo of the Center Theatre from the Kingsport Public Library collection, gives the address as 119-121 Commerce Street.

The public library of Henderson County, North Carolina, has published a book titled “Buildings as History” which is about the works of Hendersonville architect Erle G. Stillwell. The Center Theatre in Kingsport is listed as one of the many theaters he designed.

Here is an article from the Archives of the City of Kingsport about the Center Theater. There is a nice night-time exterior shot of the theater, and photos of the souvenir program from opening night.

The Center Theatre had a brief life. It would open on Monday, January 26, 1948, according to the article in the previous day’s edition of The Kingsport Times.

The newspaper also ran a brief article about the theater’s architect, Erle G. Stillwell, and his firm, Six Associates. Stillwell, though a master of the streamlined style of the day, revealed to the reporter that he much preferred to design theaters in the atmospheric style, which had by 1948 fallen out of fashion, and that he had a special affection for the Spanish and Mediterranean styles.

The article also gave the names of the other five of the Six Associates at that time: engineer Samuel Clinton Minnich, Jr., architects Henry Irving Gaines and W. Stewart Rogers, plus William Waldo Dodge, Jr. and Anthony Lord, each of whom was both an architect and an engineer.