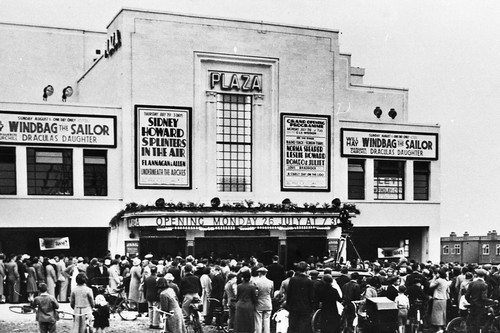 The Plaza Cinema opened on 26th July 1937 with Norma Shearer in "Romeo and Juliet". It was built for an independent operator and was located in the district of Blackfen, close to Sidcup, Kent which today is a south-eastern suburb of Greater London.

It was taken over by the Odeon Theatres Ltd circuit on 21st June 1943 and re-named Odeon on 6th May 1946. With the downturn in cinema-going in the mid-1950’s due to the introduction of television, the Odeon was an early casualty and closed on 27th October 1956 with Jack Hawkins in "The Long Arm" and Hugo Haas in "Edge of Hell". It stood empty for six years until 1962 when it was demolished and a Safeway (today Somerfield) supermarket was built on the site.

A photograph of the opening of the Plaza Cinema in July 1937:
View link

This may be the same 1951 photo, but the above link no longer seems to work.