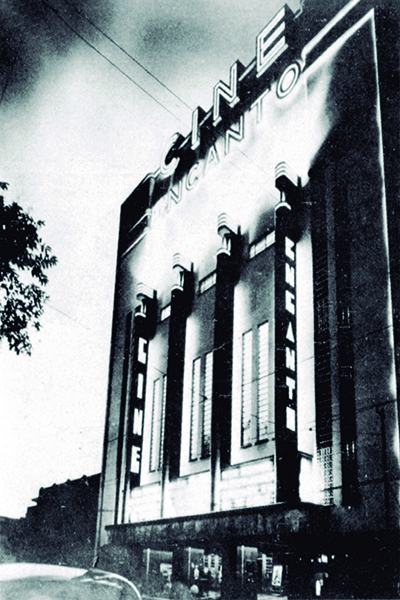 Mexico City probably had more jumbo cinemas than any other metropolis in the world. Opening in the midst of the Depression on 5th May 1937 with “Ayudame a vivir y El cazador blanco”(Help Me To Live, I’m A White Hunter), the modernistic Cine Encanto had 4,000 seats, with 2,000 on the ground floor and the rest in two steep balconies.

It suffered severe damage in an earthquake in 1957 and was demolished. Today the site houses a magazine & newspaper distribution centre which was built in the 1980’s.

I think the business listed here is in the theater building:
http://tinyurl.com/2tgxcu

I frequently walk in front of this address and until recently I had no idea there had been a cinema there, my 92-year-old father confirmed this and he even told me he watched a movie or two at the Encanto (he worked only two blocks away). To update some of the info posted above, the whole building was demolished due to the heavy damage caused by the 1957 earthquake (most of the roof collapsed). Today no trace of the original building remains (as seen in Google Maps), and at the same address a magazine & newspaper distribution office was built in the 80’s. As a curious note, the sidewalk has raised several inches above normal street level and part of the warehouses in the back of the lot lie almost 5 feet below street level, which is consistent with the layout of the original building.

The Cine Encanto was featured in the “Better Theatres” section of the September 18, 1937, issue of Motion Picture Herald, but the magazine got the name wrong, labeling it Cine Elcanto (scan at Internet Arcnive.) There are two photos of the cavernous, strikingly modern interior. The architect was Francisco J. Serrano.