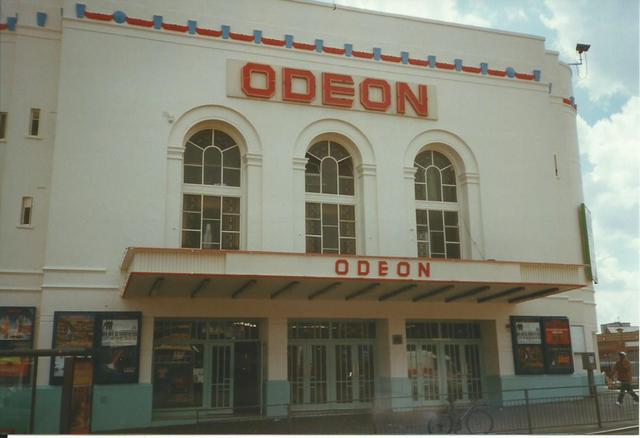 Located in Barking, Essex, today a district in the east of Greater London, on the corner of Longbridge Road and Salisbury Avenue, opposite the Barking Railway & Underground Station. The Rio Cinema opened on 17th August 1935 with Lupe Velez in "The Morals of Marcus". It was built for and was operated by the independent circuit Kay’s Ltd. (Kessex Cinemas). Facilities in the cinema included a luxurious café lounge, and a beauty parlour for patrons. Initially on-stage variety performances were part of the programme and the Rio Cinema was equipped with a fully operational stage and dressing rooms.

It was taken over in 1936 by GFC (Eastern Cinemas) and was taken over by Odeon Theatres Ltd. chain of Oscar Deutsch from 28th February 1943. It was re-named Odeon from 31st December 1945.

In December 1974 it was converted into a triple-screen cinema, with 846 seating in the former circle screen and 149 & 144 seats in the two mini screens located in the former rear stalls area. Further sub-division into a six-screen cinema was carried out in April 1990.

The Odeon was closed on 10th December 1998 and was demolished in March 2001. A block of residential flats known as ‘The Odeon’ was built on the site.

I grew up in Plaistow and this used to be our cinema of choice (since it was the closest one to us). So many great memories. The last movie I saw there was Alien Resurrection, a year before it closed.

Movies I saw here (in no particular order):