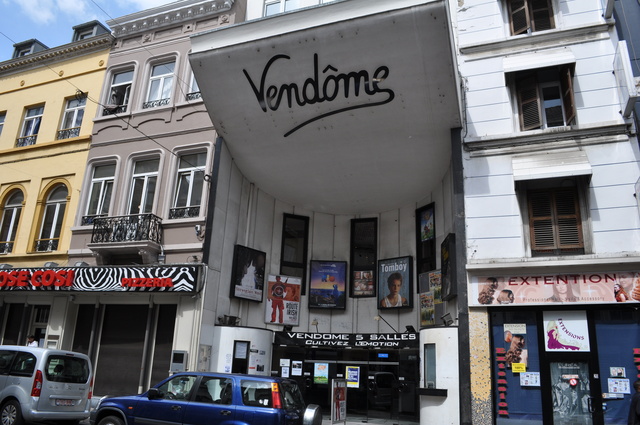 The Vendome Cinema was converted into a 3-screen cinema in 1992, and an additional 2 screens were added in 1995. It shows arthouse films. The cinema is French so ask if they have subtitles or original versions if you don’t speak French.

In my day – 1979 – this was the Leroy with three screens…From my understanding they merged with the Vendome on the much posher Avenue Louise which had at the time 4 screens…back in 79 the Vendome was primarily arty and French product with the occasional American picture – saw Norma Rae there
The Leroy handled a lot of mainstream United Artists, Paramount and Fox product and the main screen was the place to see things like Deer Hunter, Alien, Moonraker, Escape from Alcatraz and Ralph Bakshi’s Lord of the Rings (my Xmas evening movie)…also saw Manhattan and a reissue of Breathless in the smaller screen
The current Vendome appears to do mostly arthouse product and is in roughish commercial street

At least no one could Steal one-sheets.don’t think I have ever seen them THAT high.

The Vendome has 5 screens and not 7, as can be seen above the entrance doors: 5 salles. The first 3 of the former Le Roy cinema are the main screen + 2 extra screens on the former Balcony. 2 additional screens were created by opening up the back wall of the adjoining closed down L'Empire on the Chaussee d'Ixelles. The screens and projection booth were inversed, thus allowing the ground floor to become a supermarket that uses the former entrance.