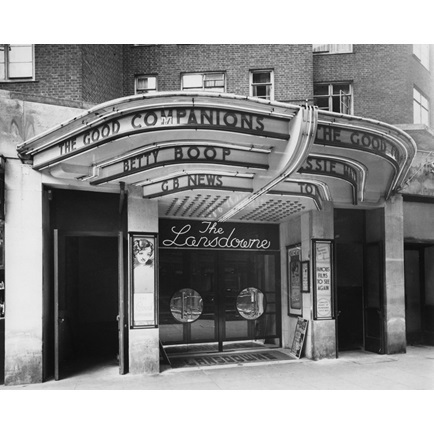 Located in a narrow alley, just around the corner from Berkeley Square in central London’s fashionable Mayfair district, the Landsdowne News Theatre opened on 21st January 1937, operated by County Cinemas circuit. It was in the basement of a newly built block of luxury flats and shops and was designed by the architectural firm Wimperis, Simpson & Guthrie.

Inside the auditorium, seating was arranged on one level and indirect lighting troughs in the ceiling illuminated the space. It was not a success, as there was little foot traffic in this mainly residential area and the Row did not allow vehicles to pass through.

Two months after opening it ceased to be a news theatre and went over to a repertory feature film policy, with Clark Gable in "It Happened One Night" being the first feature film shown.

From 28th June 1937 it had a change of name to Berkeley Cinema and began an art house policy with Emil Jannings in "Derr Herrscher". Despite some success showing films like "La Femme du Boulanger" which had a long run, it all came to end when World War II began and business was hit badly. It closed in late-November 1939 with Fernandel in "Ignance" and never re-opened. It had been open for less than three years.

Sometime after the war, the space was converted into an Arabic club (possibly used for gambling), but this closed at the end of 1983 and the entire block of flats, shops and the former cinema were demolished and a new apartment building was errected on the site.