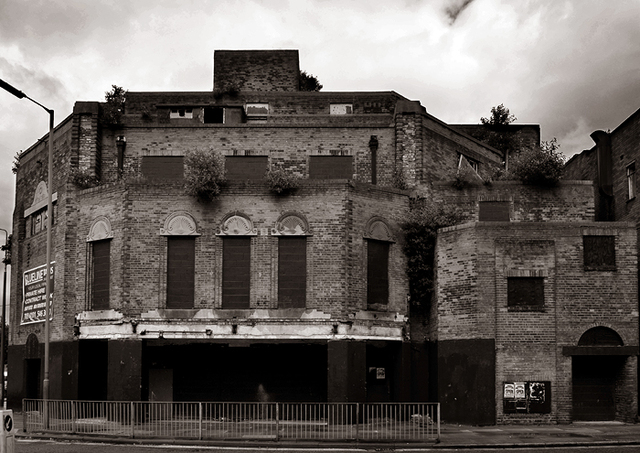 The Carlton Theatre was located in the Tuebrook district of Liverpool. It was located on a prominent corner site at Green Lane and West Derby Road and externally was an outstanding building, built with brick that had white stone trimmings over the windows.

It opened on 11th June 1932 with Gene Gerrard in "My Wife’s Family". Built for an independent operator, at the time of opening it was Liverpool’s largest purpose built cinema. Seating was provided for 1,280 in the stalls and 668 in the circle. The side-wall decoration was rather plain apart from plaster cast leaping stags above the circle level, a design which was copied on the original screen curtains. The proscenium arch had wings containing a series of vertical gold ribs on each side, which were lit by concealed lighting. The theatre was equipped with a stage, and dressing rooms, a Christie 3Manual theatre organ and a cafe, which had a Chinese decorative treatment.

It was taken over by Associated British Cinemas(ABC) from 12th June 1935. By the end of the 1950’s the cafe had closed and the space became the district offices for ABC. The Christie organ, which was played regularly into the mid-1950’s, had been sold to a private collector and removed by the end of the decade. In 1963 it was installed in the former Regent Cinema, Stotfold, Bedforshire. The Carlton Cinema was re-named ABC in December 1962 and continued until 22nd January 1972 when it closed for modernisation. The rear stalls under the circle was converted into a Painted Wagon pub, which had its own seperate entrance on West Derby Road. The circle was re-seated and re-opened with 636 luxury seats. The original proscenium and the side walls were covered with a curtain material and the front stalls area was left un-used.

It re-opened on 27th March 1972 with Ali McGraw in "Love Story". In 1975, the ABC was only open for evening performances and it closed on 9th July 1980 with a John Travolta double bill "Grease" and "Saturday Night Fever".

However all was not quite lost as it re-opened the following day under a new name Carlton Cinema by an independent operator. Unfortunately, this was not to last long and final closure came on 4th December 1982 with Nastassia Kinski in "Cat People".

The cinema remained empty and unused for over 33 years and become derelict, although the bar remained open, re-named the Lord Derby. The building was prepared to be demolished in May 2016, but it still stood until it was finally demolished in November 2017.

Thanks for adding this cinema today, Ken.

Scroll down to page 15 to see a vintage photo of the auditorium with the “leaping stags” on the original screen curtains, as Ken describes.
View link

Happy memories of the Carlton Tubrook, I worked there in the 50s

some recent pics of the projectors

Update: July 2010.
Everything is derelict, and demolition is imminent.

Demolition was commenced in May 2016.

Scaffolding was put up to commence demolition but as of January 2017 all the scaffolding has been removed.So looks like its reverted to its status as Liverpools most derelict cinema.

It wasn’t the largest cinema in Liverpool when it opened. In 1932 an official count of the seats revealed that they were less than had been originally claimed. There was a total of 1,912 seats, 1,552 in the stalls and 660 in the balcony. This still made the Carlton the second largest purpose-built cinema in Liverpool at the time (after the Commodore in Bankhall with 1,966 seats). When the Paramount in the city centre opened in 1934 with 2,670 seats, the Carlton became the third largest.