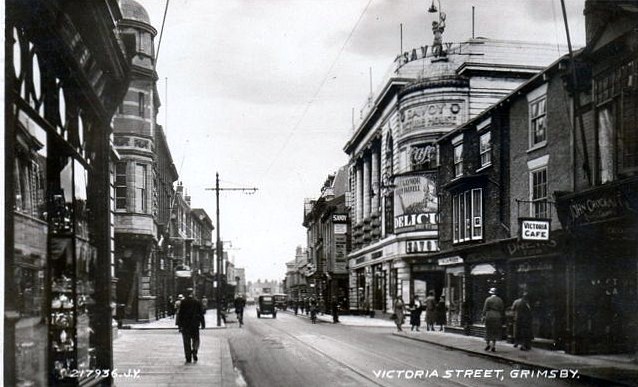 The Savoy Picture House opened on 24th May 1920 and was built for the Biocolour Picture Theatres circuit. Biocolour were taken over by Gaumont British Theatres in March 1927.

At that time, the Savoy Picture House was considered the best cinema in Grimsby. The cinema’s entrance was on a corner and the façade was faced with white tiles. On the top of the building is a statue of a young girl, who seems to be clapping her hands. Beneath the statue the name ‘Savoy Picture House’ is set in tiles. It had the latest projection equipment and the auditorium was decorated in cream and gold colours. An added facility was a tea room that was located on the balcony foyer level. The Savoy Picture House was the first cinema in Grimsby to show ‘ talkies’ when Al Jolson in "The Singing Fool" played for two weeks in 1929.

The Savoy Picture House was re-named Gaumont from 19th April 1950 and was renamed Odeon from 21st October 1962. The Rank Organisation leased the cinema to the independent Brent Walker group from 5th October 1975 and it was re-named Focus Cinema. Just over two years later, on 24th December 1977, the Focus Cinema closed.

In around 1983, the building was converted into shops and a MacDonalds restaurant opened on 3rd December 1984. A false ceiling has been extended from the front of the circle, and the circle seating area (sans seats) survives above the restaurant.

A vintage photograph from the late 1940’s showing a close-up of the entrance to the Savoy:
View link
A full view of the Gaumont, playing the Gaumont release films in April 1956:
View link
As the Odeon in around 1967:
View link