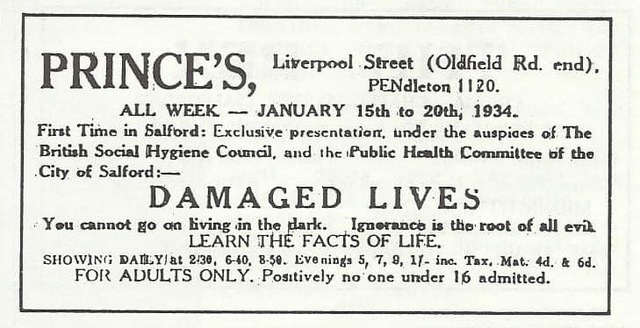 The Prince of Wales was originally opened as a music hall in 1882.

The first films were shown in 1905, however the venue continued as a live theatre showing occasional films until 1915 when it moved over fully to film exhibition. To mark the change, the name was shortened to Prince’s Cinema. It appears that the Prince’s Cinema doubled as a ballroom as well as a cinema for a short period.

In 1929, the cinema was refurbished with new seating and an organ. The walls were painted Wedgwood blue with white floral motifs. The following year ‘talkies’ were introduced when a Western Electric(WE) sound system was installed and the seating capacity increased to 600.

Not much is known after 1934 except that the cinema was under the ownership of Suburban Cinemas in 1942, but by 1944 the cinema was being used as an office supplier.

The Prince of Wales later became a waste paper factory and was demolished in 1973.