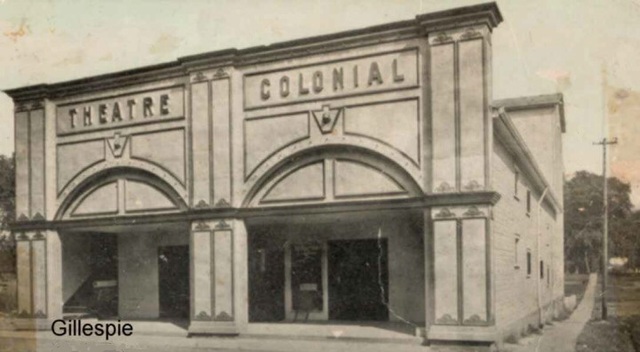 The Colonial Theatre opened in the early 1920’s and was owned by the Westley brothers. In 1928 it had one of the largest theatre organs in the state, and was the first theatre in Gillespie to show ‘talkies’ when on February 6, 1929 “Shopworn Angel” was screened.

It later went on to close for part of the summer and in 1930 closed as a full time movie theatre and reverted back to live theatre presentations, but with ocassional movie use.

It was listed in the early 1940’s as being the only theatre in town to be operated by the Frisina Amusement Co. By 1945, the Colonial Theatre is shown in the Film Daily Yearbook with 600 seats as being closed, and Frisina were also operating Gillespie’s other movie house, the Lyric (today called the Canna Theatre).

The Colonial Theatre has been torn down.