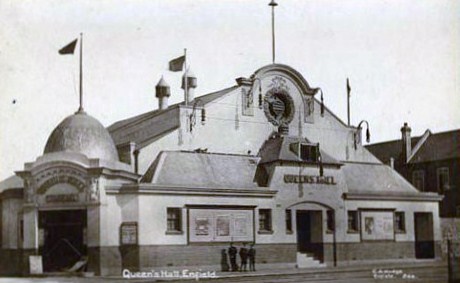 The Queen’s Hall Kinema opened on 11th November 1911, originally with 650 seats on one floor. It was independently operated and was the first purpose-built cinema in the area. In 1928 the kinema’s seating was increased to 1,300 with the installation of a circle. A tea lounge/cafe was also one of the facilities on offer.

It sustained some damage during an air raid in 1940 and was closed, becoming a government Ministry of Food store. After the war was it was taken over by Davies Cinemas Ltd. and re-named the Florida Cinema, re-opening on 19th May 1947 with the seating capacity reduced to 878.

From 17th December 1974 it was purchased by the Granada Theatres Ltd. chain. Granada already operated the former Rialto Cinema in Enfield which they had re-named Granada, and the Florida was soon found to be surplus to requirements. The Florida cinema closed on 17th December 1976 with James Coburn in "Sky Riders" and Michael Caine in "Peeper".

The building was converted into a banqueting hall and function suite known as The Town House. It’s last use was as a nightclub named the Townhouse Leisure Lounge which closed on 31st January 2004. It was demolished in early 2005 and flats have been built on the site.