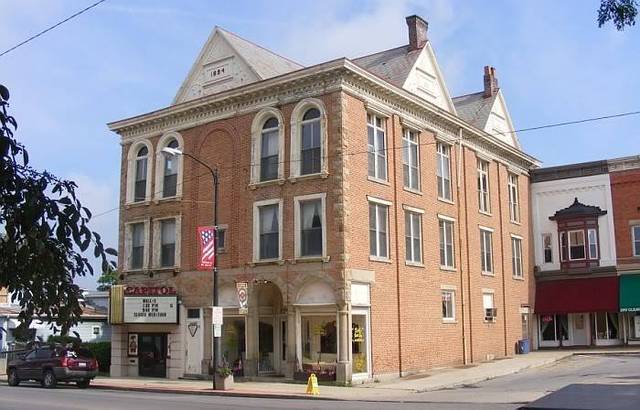 Operating as the Rex Theatre between 1931 and 1935. The Capitol Theatre was operating prior to 1941.

Listed for sale according to its Facebook page as of Dec 30th, 2013. Showing Frozen this weekend.

Still operating as of March 2014. The building is dated 1894, which means this could be a continuing operation of an opera house, which would be extraordinary. The auditorium appears to be an add-on to the original building however. It does have one unusual feature in the back, a chimney. It’s a little surprising more doesn’t seem to be known about this theater.

According to wikipedia, Levering Hall (also still standing) was the town’s opera house until the 1940s, probably superseded by the current theater. It would seem this town’s theater history could stand a closer look.

Hi! I am the owner of Capitol Theatre in Mount Gilead, OH and yes, we are still open for business (June 2014). The dawn of digital in a small town had us reconsidering if we want to continue to run the theatre, but it made me really sad to think it wouldn’t exist anymore. I am sure the building has a storied history but can’t find much. Even the historical society was a bust. Any ideas where to look or get help?

Capitol: Newspaper archives are a good place to start. At the very least they should have ads for the theater at least once a week. Keep in mind it might not have always been called the Capitol. I’ve found references to a house called the Kaypee (or Kay-Pee) Theatre at Mt. Gilead as early as 1926 and as late as 1934. In the late 1920s, the manager was named Griff Granger, and a 1928 item in Motion Picture News said that the Kaypee was the smallest first-run theater in Ohio.

There was also a house called the Rex Theatre in Mt. Gilead, which I found mentioned in 1931 and in 1935. Either Kaypee or Rex might have been an earlier name for the Capitol.

Are there any clues to what the building housed when it was built in 1894? It’s usually easier to find information about a building if you know what it was originally used for.

Hey, that’s some great info! The building was donated to the Knights of Pythias in the early 1900’s (perhaps the KayPee?) but that’s all I know. Most of the local Knights have past away and the history is lost with them. As for the chimney, we did find that unusual and will investigate more. I’ll have to look into the info you provided. Thank you!

There’s not too much about Mt. Gilead’s old buildings on the Internet, but I did find a reference that is probably about the block the theater is in in a 1911 book called History of Morrow County, Ohio; a narrative account of its historical progress, its people, and its principal interests:

“The substantial business blocks erected on North Public square, erected by Mark and Perry Cook, commenced in 1894 and ended with the Masonic Temple block in 1899….”

The book also mentions the donation of the third floor of the building to the Knights of Pythias in 1905:

“For several years prior to September 19, 1905, the lodge had occupied the convenient and desirable rooms in the third story of the Cook Block, at the northwest corner of the North Public square, as their Castle Hall, and on that day brother Mark Cook, a member of the lodge, presented to the trustees of the lodge the entire third story of said block for their Castle Hall. It was a very generous gift, and is valued at four thousand dollars.”

The July 6, 1929, issue of Motion Picture News had a brief item about the Kaypee Theatre:

“Parties interested in Kaypee, Mt. Gilead, will confer with local ministers regarding operating house on Sunday, on account of six day operation showing loss. If Sunday showings cannot be arranged, house may be closed.”

A report on the meeting in the July 6 edition of the Marion News revealed a clever ploy on the part of W. F. Bruce, one of the parties interested in the theater. He proposed to operate a dance hall and skating rink daily if the ministers did not agree to withdraw their opposition to showing movies on Sunday. Faced with that choice, the minsters caved and Mt. Gilead got Sunday shows.

The interesting thing is that, if Bruce intended to operate the theater space as a dance hall and skating rink it must have had a level floor, which means the theater must have still been located in the third-floor room in the Cook Block, and so the ground floor auditorium must have been added behind the building after 1929. If the new auditorium was built by 1931, it could be that the Capitol opened as the Rex Theatre, the house that was mentioned in trade journals in 1931 and 1935. When I get a chance I’ll check the Film Daily Yearbooks from the period to see if there are any clues.

A chimney is not a very unusual feature of older theaters in the east. They served as the vent for a coal or oil-fired furnace or boiler (which was usually located in a basement) that provided heat for the building.

The Capitol is the Rex. The name was changed by a previous owner. I use to service the projection equipment and previous owners include Jerry Dotson, a partnership (names escape me but one of them was Steiger), and Joe Bash. It was a silent house and you could see where a piano pit was covered up in front of the screen. If the new owner wants any additional history, he can contact me.

John 3570: Yes!! I would love more info. I don’t have your contact info. You can contact me directly at . Thanks so much!