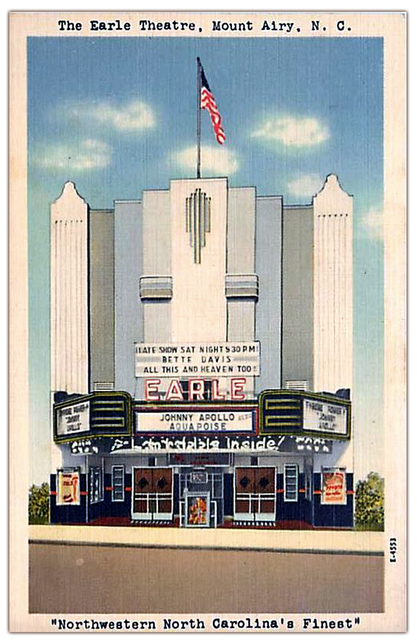 The Earle Theatre was opened in 1938 with a seating capacity for 600. It was operated by the Stewart and Everett Theatres chain. It was closed in 1980 due to competition from multiplexes nearby.

In 1990, Stewart and Everett Theatres donated the theatre to Surry Arts Council. The theatre was in great disrepair and after countless hours of volunteer work, the theatre got a new lease on life, reopening as the Downtown Cinema Theatre. The Surry Arts Council operates the theatre five nights a week, showing movies at a 3.00 admission. The theatre is also available for other activities. By 2011, it was known again as the Earle Theatre

The above article deals with this theatre which was in Andy Griffith’s hometown which was the inspiration for Mayberry.

Love going to this theatre on Sunday afternoons if I didn’t make it to a movie at the first run theatres. Small screen, but comfortable, quiet, and it’s fun to sit in the balcony! Very nice staff. Theatre and employees offer a very ‘hometown’ feel.

Element 02 you might have caught “BALLAD OF CABLE HOGUE” there on June 2 1970 with “PUFNSTUF” coming next.

I just saw the Reese Witherspoon-Owen Wilson comedy ‘How Do You Know’ here a couple of weeks ago. The staff actually recognized me and asked how I’d been doing. Haven’t been here in probably two years :–) Always a nice trip back to yester year with this quaint little cinema.

The theatre that has been known as the Downtown Cinema for the past fifteen years or more, is now listed as the ‘Early Theatre’ in newspaper listings and on their phone message. Price has gone up to $5.00 per person, most movies shown are already out on DVD. Beginning of the end if you ask me :–/

From the early 1940s a postcard image of the Earle Theatre in Mount Airy, N.C.

Went to see the box office dud ‘Cloud Atlas’ here a couple of weekends ago. Missed it first run, this was the only theater playing it in the area. The service was great, but $5.00 is too much to pay for a second run movie, especially when the theater is in dire need of repair. The theater has been transformed into a bluegrass music museum during the day. The seats are uncomfortable (unbearable almost for the three hour movie I watched). The sound was barely audible. The movie itself was grainy and scratchy. At the two hour mark, the movie cut off and the screen went dark. I soon realized that the 2nd reel had to be put on and the movie came back on about 20 seconds later. I love supporting the old theaters, but am quite disappointed in this one and won’t be returning unless something I desperately want to see comes around.

The theatre now shows DVD’s on screen. I thought that this was illegal, but apparently not. Most theatres have converted to digital, and I guess Earle Theatre couldn’t afford to make the transition. They still charge $5.00 (even though the movies playing have been out on DVD for a couple of months).

Official website of the Earle Theatre with it’s history.