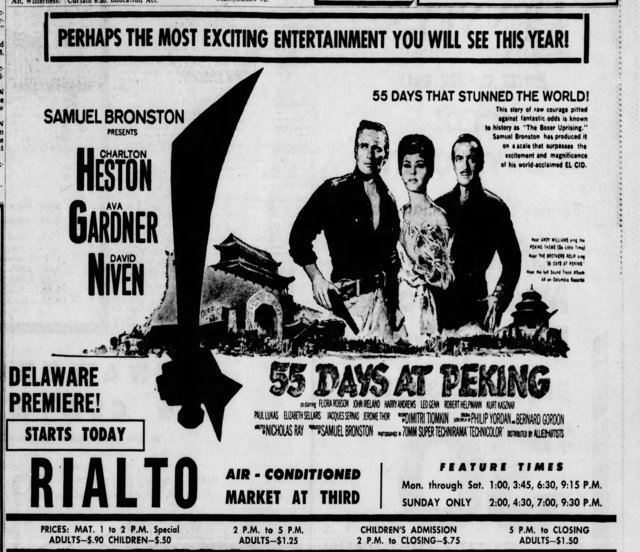 The Lyric Theater opened in 1908, at 220-22 Market Street. At some time, Philadelphia theater architect William H. Lee worked on this theater, and it was renamed Rialto Theater November 11, 1930.

This was the longest operating movie theater in Wilmington, with its final picture show, a double feature of "Master Killer" and "Maniac" on March 5, 1982. The building was badly damaged by a fire in February 1984 and was immediately demolished.

My first summer employment as a young man of 16, was as an usher at the Rialto Theater for the princely sum of $1 per hour (old tuxedo jacket and flashlight included). By the time I took the bus Newport into town and had lunch or diner, I just about broke even.

The summer I worked there I remember seeing Von Ryan’s Express enough times that I knew the script by heart. That would have been around 1965.
One interesting fact was during that time, the theater did not sell popcorn because the manager, as I recall, thought that it created too much of a mess to clean up.

At that time there were several theaters still operating in downtown Wilmington. The exodus to the suburbs was just on the horizon.

As the downtown theaters closed, the Rialto operated for a while as an “art theater', before going dark. It was later revived for a while and played classic films. I remember seeing Casablanca there and being amazed at how different it looked on the big screen, after having only viewed it on tv.

The Cinemart opened just as movie theater chains began to multi-plex
their existing old theaters, leaving the Cinemart obsolete almost as soon as it opened. Making matters worse, the Governor Prinz Blvd. was already well into it’s long decay, which started when I-95 opened. The greatest victim of this was the Merchandise Mart, which used to be Wilmington’s most vital suburban style strip shopping center. The Cinemart also was located very close to the late and still missed Edgemoor Theater, a grand venue with a long history of independent ownership. The Cinemart, booked by the Budco Chain, was doomed from the start, and never was given “big” films, unlike the Edgemoor, which premiered both “Jaws', and "The Godfather”. I remember one particularly sad week, when a desultory little Aussie film called “Dogpound Shuffle” was booked there. I passed by the theater every day while on my ice cream truck route, and remember no more than ten cars in their parking lot all week.
I remember the Cinemart to have a rather gaudy interior motif, with lots of gold paint, mirrors, and a very large chandelier. You can still catch a peek at the interior if you look through the dirty glass in the doors. Please also catch a look at the “shadow box” to the left of the entrance, there is still a small Budco sign there, along with period appropriate shag carpet which was used as the backdrop to the posters. These are my most compelling memories, I hope that they have been useful to you. Cheers!

hey. barry? what year do you think the cinemart closed??
thanks

The Rialto held the world premiere, for who knows what reason, of 20th Century Fox’s “Sodom and Gommorah”

Thanks Barry! Great write up! I may drive over there one day and take a video for all the web to see.

In February 1984, the Rialto was badly damaged in a fire and was demolished immediately afterwards.

1st place I ever saw an adult movie @ 1973, still 17 years old. My sister told me a man told her a gun went off when he was in the theater. Funny thing…that first movie was so too much for me as I fell asleep.