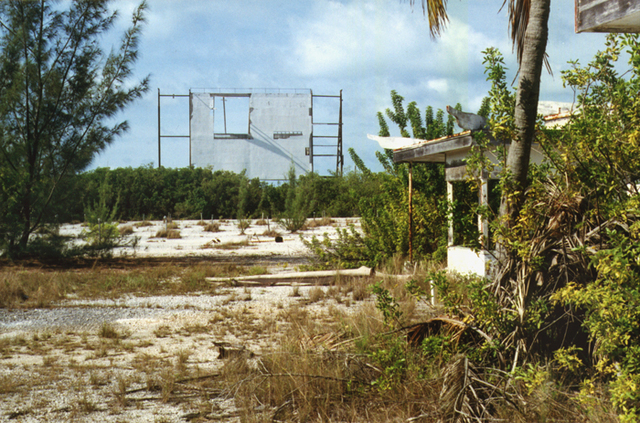 One of two drive-in theatres to open in the Key West area was the Islander Drive-In. It opened on February 28, 1953, screening the 1952 western “The Cimarron Kid” with Audie Murphy, Beverly Tyler and James Best, plus three color cartoons. The Islander Drive-In was opened by Joe Sirugo and he sponsored a contest to name the new drive-in theatre. Out of 470 entries, the $100 prize winner was Mrs. Mickey Renna with “The Islander Drive-In” as the winning name. When it opened it was said it had the largest screen in the state of Florida. A lot of drive-ins claimed that when they first opened. The parking ramps had a capacity of 650 cars with in-a-car speakers. Starting in 1960, it was operated by K. Gordon Murray & Joseph Fink (dba Murray and Fink Theatres) from Dania, FL. After they left the operators/owners are unknown. The drive-in closed in July of 1984, fell into spectacular ruin, and was finally torn down in 2004 to build the Islander Village which is multifamily modular homes.

The Islander Drive-In lives on in Jimmy Buffett’s song, "Grape Fruit, Juicy Fruit," which is about "committing a little mortal sin at the drive-in." The song was inspired (so says Buffett on his live album "You Had To Be There") by taking a date to see the Rip Torn movie "Payday" (interestingly enough, about a country singer who has a tendency for extreme behavior), where they mixed up cheap Gilbey’s Gin with Welch’s Grape Juice to create Purple Passions, and then "had a good go at it."