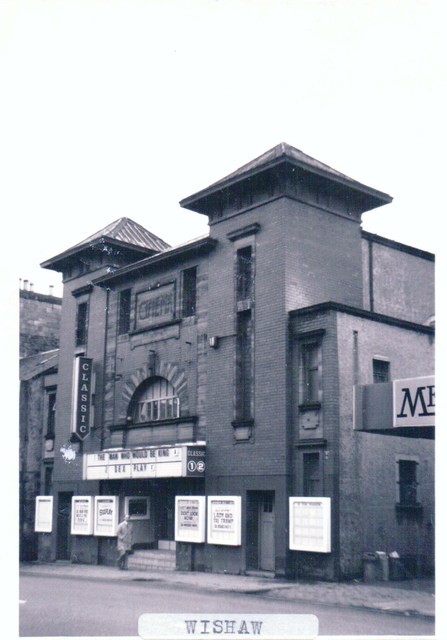 The Cinema opened in April 1920 and was built for and was operated by the independent Thomas Ormiston circuit. Designed by local architect James L. Ross, it has a striking facade with two towers on each side that have pyramidal roofs. There is a centrally located panel over the entrance with the word ‘CINEMA’ in the stonework, surrounded by stone garlands. Inside the auditorium, the seating was arranged in stalls and circle levels.

The Cinema was taken over by Denman Cinemas/Gaumont British Theatres Ltd. in March 1928. In 1939 the mighty 2,982 seat, Green’s Playhouse Cinema, was built immediately next to the Cinema, but both buildings managed to attract good audiences for many years.

The Cinema was later operated by the Rank Organisation, they sold the Cinema to Classic Cinemas Ltd. of London on 9th December 1967. It was re-named Classic Cinema and closed on 28th October 1972 with “Thunderball” and “Dr. No”. It was twinned and re-opened on 18th November 1972 with 332 seats in the screen in the former stalls and 134 seats in the former balcony screen.

Closed in 1985, the balcony screen re-opened in 1986, but this was short lived and it closed in July 1988. The downstairs screen was converted into an amusement arcade, known as Illusions and billiard hall, whilst the former balcony area has remained unused. By 2009, the building was in use as a bar & nightclub named Zico’s.