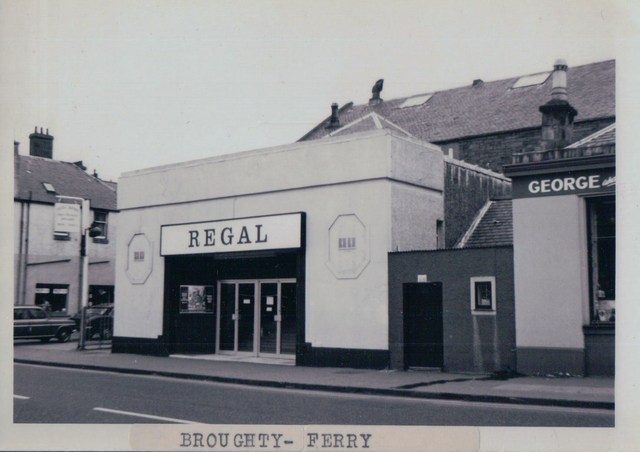 Broughty Ferry is an eastern suburb of the city of Dundee. This building was errected in 1870 to serve as a volunteers hall for the army. In 1936, a circle was added and it was converted into the Regal Cinema. Mahogany paneling in the foyer was salvaged from the White Star liner Homeric.

The Regal Cinema closed in 1960 and was converted into a bingo hall. This closed in June 1991 and since 2007 the building has been in use as a car showroom, the West End Honda Garage. Unfortunately, this new use resulted in the foyer being demolished. Otherwise it retains its internal decorative treatment and is well looked after.

As well as having lost the foyer, the rear section of this building, including the projection booth and a fire escape, were demolished in 2007. Permission was applied for retrospectively for these alterations. A new application submitted in early 2008 now proposes to remove the stalls rake and stage, create a new larger glazed entrance in the sidewall, and open up the original windows and doors currently boarded up in the gable behind the proscenium area.

The Regal switched to bingo in the 1970s. Owned by Arbroath Cinema Company Ltd, together with it’s sister cinema The Picture House, Arbroath, these were the last two cinemas aquired by Scottish cinema magnate J.B. Milne in 1968 shortly before his death later that year. I went to see films at the Regal several times during 1968/9. It was a delightful little cinema, possibly the nicest suburban house in Dundee. The manageress, Miss Humphries (whose sister managed the Cinema House, St Andrews) took immense pride in the Regal which was still well patronised in the late 1960s. Kingsway Entertainments, who took over the J. B. Milne circuit, switched the cinema to bingo. During the 1950s Arbroath Cinema Company, who maintained both their cinemas to very high standards, were the first exhibitors in the county of Angus to install CinemaScope.