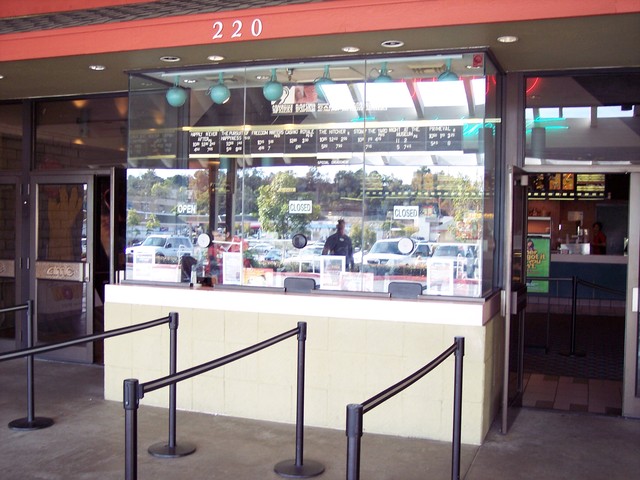 Originally a six-screen theatre with six Cinemecanica Victoria 8 projectors, two more small screens were added later on with Strong projectors and Christie platters. First AMC in San Diego to have seperate booths, two projectors per room. Two level theatre. This theatre had traditional seating. It was closed January 28, 2007 and was soon demolished. A Staples store is now on the site.

This theatre actually had Cinemecanica V5 projectors not V8s. The V5s were belt driven and the V8s are oil bath gear driven. Also, the V5s only could do 35mm and the V8s could do 35 and 70mm film. The booths 1 and 3 were for the large houses and had Dolby CP50 processors in them. Booth 2 had Smart sound systems and booth 4 (3.5 actually) had ultra*sound sound systems. This booth also had strong simplex 35 projectors. You could also interlock theatres 1-6 together or any combination of them. theatre 2 had a silver screen. theatres 7 and 8 were added on and used to be a daycare facility before it was torn down to add these two screens.

Cool article about theaters in the area back from 1991.

Here’s the text from the article (in case it goes away).

SPECIAL REPORT: Putting Down Roots : The Times Poll : Theaters Can Vary Almost as Much as the Movies April 25, 1991|KEVIN BRASS

Going to the movies is what 43% of North County residents say they do when they go out for the evening. It is an activity most popular with newcomers. Of those who have lived in the area two years or less, 57% name it as what they do ; o f those who ’ve lived in North County more than 20 years, 29% name movies. —The Times Poll

The Wiegand Plaza Theater complex has a cappuccino bar, which pretty well sums up the state of North County movie theaters.

It’s the little things that define a theater these days. The old, stylish movie palaces of the past are rare, as the major theater chains use cookie-cutter designs, usually resulting in theaters with all the warmth and sensitivity of a cardboard box with curtains.

Through the years, the giant 70-millimeter screens have also gone the way of the Hula Hoop. The quality of sound systems has improved, but a standardization of sorts has developed, with most theaters looking and sounding relatively the same.

In the North County, there are a few older movie theaters, grand old movie houses. Unfortunately most are either closed or operating as speciality houses. The La Paloma Theater, a Moorish-style building that has been part of coastal Encinitas for 50 years, is a beautiful theater. But it doesn’t always show movies, and, when it does, they are usually second-run films, films that have already been shown at other theaters.

Although drive-ins once flourished in the area, only one remains—the Valley Drive-in in Oceanside, which stands as a monument to back-seat parties, questionable sound quality and big screen bravado.

These days, movie fans are forced into the sterile new theaters, where they spend $7 for a ticket but usually can’t even buy a cup of coffee. That’s why it is kind of stunning to wander into the Wiegand Plaza 6 in the heart of Encinitas and find a cappuccino bar, complete with herbal teas and cheesecake.

And the Wiegand complex is not that unusual in North County, where even the stripped-down operations have a few special twists.

On the face of it, Wiegand, stuck in the middle of Shopping Center Land, could be any one of a thousand 16-in-one complexes that dot the landscape. On any given night, it is overrun by preteen and high school brats from the neighboring suburban housing developments, feeder factories of preteen moviegoers.

However, apparently because of the competition and the higher expectations of the North County crowd, Wiegand has added a few touches. There is the standard snack bar, with popcorn, candy and over-priced soft drinks, and then there’s the little counter in the corner, where a more discriminating movie fan can pay $2.50 for a piece of cheesecake and $2 for a bottle of water. Of course, it’s not perfect: There are no covers for the herbal tea cups.

Inside, the environment is a step above sterile. There is no music playing before the movie; once a staple of the premovie environment, music is rare these days, even of the elevator variety. But there is a slide show, advertisements mixed with inane movie trivia questions.

The theater is comfortable and clean, though, which in itself is unusual. The curtains are drab but clean, the aisles wide, the seats well-padded with decent leg room.

Best of all, the seats have little rings on the arms to hold drinks. All that is good in movie theaters these days can

be summed up by those little drink rings. It makes so much sense. Instead of having to search under the seat blindly with one hand, running your fingers across God knows what in search of your drink, it is right there, easy to find.

The four theaters in the Flower Hill complex in Del Mar have the drink holders, which almost makes up for the fact that Flower Hill split its one large theater into two smaller ones a few years ago. But Flower Hill, on the road to Rancho Santa Fe, certainly tries hard. The low-cholesterol butter available for the popcorn is a nice touch and clearly reflects the nutritional sensibilities of its patrons. Flower Hill is also one of the most flat-out comfortable theaters in the area. The chairs are cushiony and rock back and forth. There should be a law that all movie theater chairs should rock.

The theaters are clean and patrons are entertained with a little light jazz playing over the speakers before the movie. Wide aisles allow for plenty of leg room and—this is important—the chairs have enough space between them so it is easy to put your feet up, if it is possible to do so without bothering other lounging patrons. At many theaters, they cruelly space the seats just far enough apart so you can wedge your foot in between, but it feels like a Chinese torture.

Flower Hill, although it is several years old, has the look and feel of a new theater, and newness is the most dominant feature of the North County theaters. Except for the area around El Camino Plaza in Oceanside, where there are no fewer than 15 screens within a quarter of a mile, most of the theater complexes have been built within the last 10 years, including the Galaxy Six Cinemas in Bonsall, a relatively remote area which has never been known as a thriving movie community until now.

The Edwards Cinemas sixplex in San Marcos is fairly typical of the new breed of theaters. It is clean and slick. A chandelier-like ornament hanging in the lobby is a classy touch, but there are few frills. A few video games are scattered around to amuse the kids.

The snack bar features nothing but the basics: popcorn, soft drinks and candy. For some unknown reason, the bathrooms are upstairs, which seems to be something of an annoying trend in theater design. There should be a law forbidding theaters from putting bathrooms upstairs.

Inside, music plays before the movie, and there is plenty of leg room. And there is a good slant to the seats, in the sense that the seats are angled toward the screen, providing patrons with better sight lines than in some slant-less theaters. The interior is comfortable, but there is a noticeable lack of drink holders.

These are things that are important to movie patrons. If you have to pay $7 for a movie, it’s not asking too much to be able to see the screen and to have a place to put your drink.

What happened to the wiegand plaza theatres? Im sad . When did they vanish?

This theater is still closed?

Closed January 28, 2007 and demolished shortly thereafter. Now a Staples. I worked there for the final two years of its operation.

This theater closed 10 years ago today. A blog post in memoriam: http://www.criticspeak.com/amc-encinitas-8-closed-10-years-ago-today/