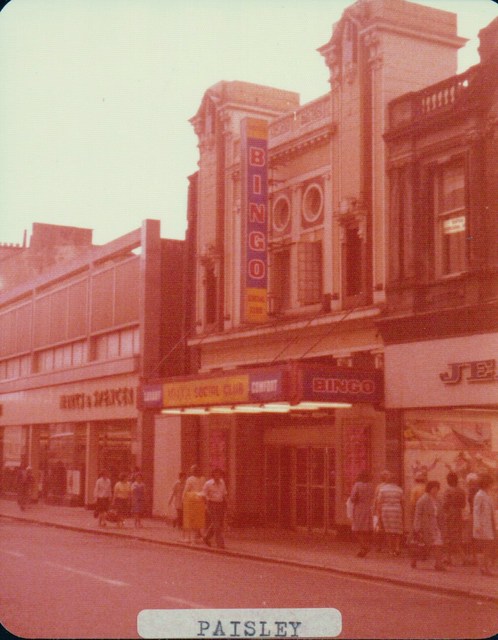 The Picture House opened in around 1912. It has a stylish and highly decorated façade in white faience. In 1930, the auditorium was rebuilt in an Art Deco style, and the seating capacity increased to 2,281. The cinema was mainly independently operated and had a restaurant and dance room.

Seating was provided in stalls and circle levels. The proscenium was 42 feet wide and the stage 18 feet deep There were four dressing rooms.

Towards the end of its cinematic life it was part of George Green’s circuit. It was sold to Mecca Ltd. in September 1967 and they operated it as a cinema until 1970 when it was closed and converted into a Mecca Bingo Club.

The Mecca Bingo Club closed in the mid-1980’s and the auditorium was demolished in the late-1980’s. A shopping centre named the Paisley Centre was built on the site, using the former Picture House façade as its entrance.

On 27th March 1985, Historic Scotland designated the Picture House a Grade B listed building. This status now applies to the façade only.

The Picture House had a 3/10 Hilsdon organ that is now part of a of a 4/45 Hilsdon in the New Palace Theatre Organ Heritage Center in Todholes, Greenlaw, Scotland.