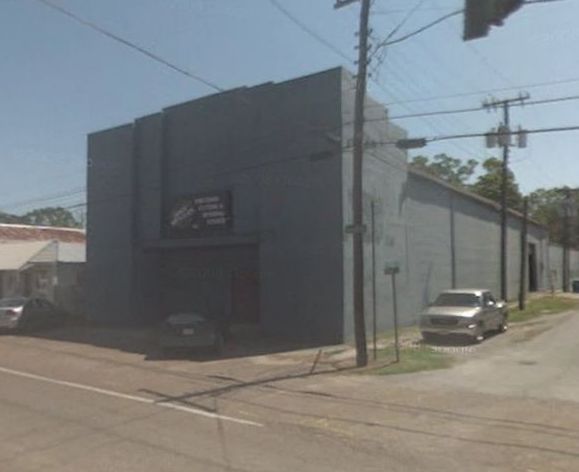 The Acadia Theatre was opened on November 16, 1946 with Roy Rogers in “My Pal Trigger”. In 1948 it was renamed Joy-Acadia Theatre. By 1955 it had been renamed Joy Theatre and was one of several in the Joy’s Theatres chain in the early-1960’s. It was closed as a movie theatre in 1974. Live shows were introduced but were not successful and in 1976 it went over to other uses.

The Joy was operated in the 60s by Mr. Ted Cobena. Upon closing it was reopened by George Melancon, and then closed for good in the 70s. It was recently used as a fabrication shop for Body Masters Co.

CinemaTour lists the Joy Theatre at 200 E. Texas Avenue, and displays two photos, dated May, 2014, from the Adam Martin collection.

In 1946, the Joy Theatre in Rayne was being operated by New Orleans-based Ritz Theatres, headed by L. C. Montgomery. The August 10, 1946, issue of Showmen’s Trade Review had this item about the Joy:

“It has been learned here that fire Aug. 3 destroyed the Joy Theatre, only house in Rayne, Louisiana, owned by L. C. Montgomery.”

Montgomery had a second house under construction at the time of the fire, to be called the Acadia Theatre. The April 10, 1948, issue of STR reported that Joy Houck had traded his interest in the Joy Theatre in New Orleans to Levere Montgomery (Montgomery already owned a part interest in the house) for his interests in theaters in Rayne and two other cities.

Ken: The Joy Theatre’s aka should be Acadia rather than Arcadia. Acadia Parish, Louisiana, was named for the French territory of Acadia (Acadie) situated mostly in what are now the Maritime Provinces of Canada, from which the French settlers were expelled by the British during the French and Indian War. Many of the settlers moved to Louisiana, then a Spanish possession. The modern word Cajun is an Anglo-American corruption of the word Acadian.

The Acadia Theatre’s first film was “My Pal Trigger” when it opened on November 16, 1946. The architects were Diboll, Kessels & Associates in New Orleans. In October of 1953 it was converted to widescreen for CinemaScope feature presentations.

Regular films were discontinued in 1974. In 1975, it was used for weekly jamborees which proved unsuccessful. In 1976, the marquee popped and then it was converted for other purposes.

That would be Collins C. Diboll, Jr. and Jack J.H. Kessels.