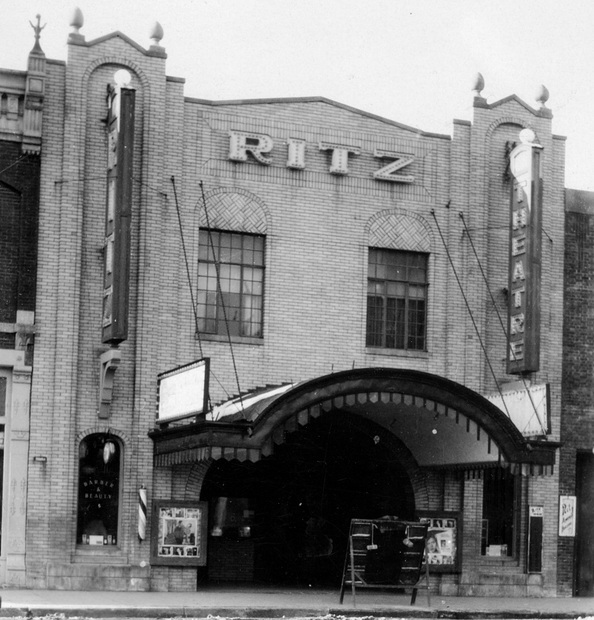 The Ritz Theatre was opened in 1928. It was operated by Central States Theatres Corp, and by 1941 it had been taken over by Paramount Pictures Inc. and operated through their subsidiary A.H. Blank.

This is from the Chariton Chamber of Commerce site in April:

CONGRATULATIONS! To Dave and Connie Hendricks and the Connecticut Yankee Pedaller, on their recent building remodeling project. The Chamber Ambassadors helped the store celebrate with a ribbon cutting on April 4th. If you havenâ€™t checked out the huge selection of bikes, exercise equipment and Lyrix wireless services, make it a point to stop by Connecticut Yankee Pedaller and see what Dave has done with the old Ritz Theatre building. And if your Chamber member business is moving into a new facility, adding on or remodeling an existing facility, or changing ownership, weâ€™d be happy to come and help you celebrate as well. Just give Evelyn a call at the Chamber office.

The “Better Theatres” section of Exhibitors Herald and Moving Picture World of April 14, 1928, had two photos of the Ritz Theatre in Chariton, Iowa. Aside from the loss of a decorative parapet, the building appears to have changed little since then. The Ritz was designed by a local architect, William L. Perkins.

Another photo of the Ritz and a brief article appear on this page of the same magazine.

Chariton had two silent era theaters in the Grand Theatre (apparently opening in 1903) and the Temple Theatre owned by Victoria Dewey and Becker & Bowen. The two entities got together and consolidated in the 914 Court location becoming the Lincoln Theatre. Henry Cramer then built the Ritz Theatre in March of 1927 taking over a retail spot held by The Woman’s Shop at 908 Court with the Lincoln just feet away. The 800-seat Ritz launched August 31, 1927.

Unfortunately, that theatre and the entire Lincoln Building with the Lincoln Barber Shop, the Lincoln Cafe, Ostman Jewelry, and apartments burned on February 27,1930 in a huge blaze. The Ritz Theatre auditorium was a casualty as well as only one building and some facades remained in the block.

William L. Perkins architected the Ritz retaining just the facade and — building very quickly — reopening May 22, 1930. Pictures of the Lincoln are in the photos section.