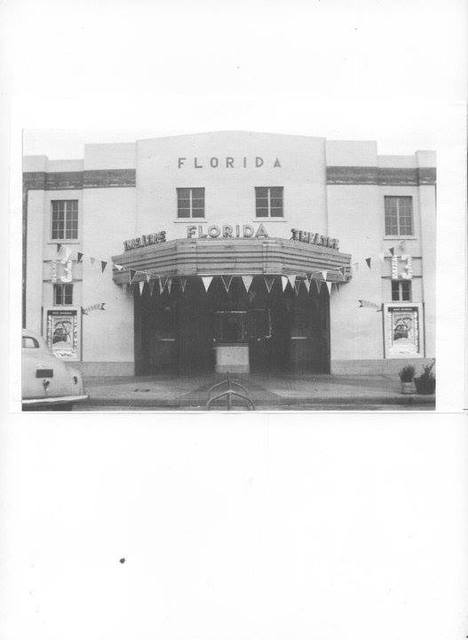 The Florida Theater was opened in 1940 by Floyd Theaters. It operated until at least 1964.

“Sebring, Fla. — Floyd Theaters has opened their new $25,000 theater, the Florida. Gene Stone is manager of the 609-seat house. Interior is finished in white-brown Celotex and cypress in natural tones with a two-tone light green trim. Foyer is finished in natural wood, with a bright red carpet. Exterior is concrete with strips of bright orange carra glass.”I suspect that “carra glass” was meant to read “Carrara Glass,” a competitor of the better-known Vitrolite brand of pigmented glass tiles.

The NRHP registration form for the Central fire station in Sebring notes that its architect, William J. Heim, also designed two indoor movie theaters in Sebring, the Florida being one of them (the other was the Circle.) He also designed the Sevon Drive-In in between Sebring and nearby Avon Park.

Susan Priest MacDonald and Randall M. MacDonald’s book Sebring has a 1948 photo of the Florida Theatre, and in the left background is the gabled roof of the side of the police station at Ridgewood Drive and Pine Street (Google Books preview). The caption says that the Florida was on the west side Ridgewood near Lime Street, which is the next street north of Pine. I think that the theater was on the lot next door to the small building that now houses Sebring Furniture, which is at 325 N. Ridgewood. The store to its south is at 321, so figuring about a four number jump per lot the theater was probably at approximately 329 N. Ridgewood.

Also I wanted to note that the Florida was not demolished in 1962. The book I cited in my previous comment said that it was demolished after 1962, and the photo we currently display indicates that it was in operation at least as late as 1964. Lawrence of Arabia (coming “Sun” on the marquee) was premiered in December, 1962, and its road show ran for over a year, with general release coming well into 1964. Son of Captain Blood was made in Italy in 1962, but according to IMDb was not released in the U.S. until the spring of 1964. The American-made Law of the Lawless was also released in the spring of 1964.