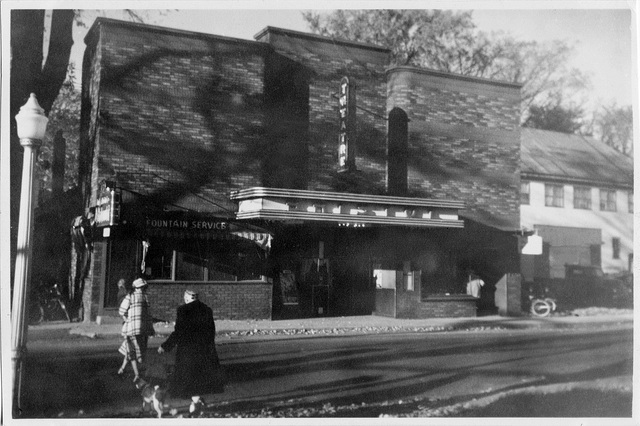 The Bristol Theater was a small rural theater built in the 1920’s. Constructed using inexpensive materials but with great care to detail, the interior was decorated in a minimalist Art Deco style.

Seating included a raised "balcony" section with the refreshment stand and manager’s office located under it and accessible from the lobby.

The Bristol Theatre’s days ended when the building collapsed from a heavy snow load in the early-1960’s.

I have tried to update the info I originally posted about the theater on at least 3 separate occasions, but my e-mails to Cinema Treasures were never answered so I gave up.

Articles about the theater from the local paper, The Bristol Enterprise, can be found on this web page:

I recently acquired a small B&W pic of the Bristol Theatre taken in the fall of 1951 and a copy of a weekly newsletter called the “Bristol Movie News”. Scans of the pic and the newsletter can be viewed at the link below.

The Bristol Theater in Bristol NH is listed under Interstate Theatre Corp, 260 Tremont St., Boston in the 1942-43 Motion Picture Almanac. That circuit ran theaters in CT, MA, NH and VT in 1942, and is not to be confused with Interstate Circuit Inc. of Dallas TX, or Interstate theatres of Thomasville GA.

The Theatre Historical Society archive has the MGM Theatre Report for the Bristol Th., it’s Card # 473. Address is “Main St.” There is an exterior photo dated April 1941. Condition is Good. The report says it opened about 1930, that it shows MGM films and has 403 seats. 1940 population was 1,600.