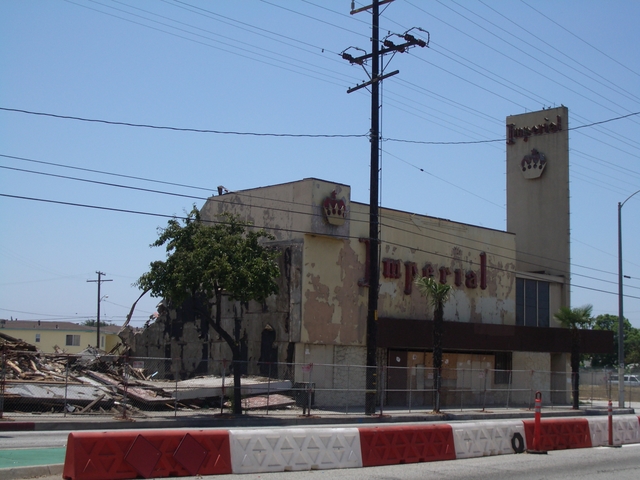 The Imperial Theatre was opened on March 9, 1949 with Ronald Reagan in “John Loves Mary” & Madeline Carroll in “High Fury”. This medium-sized theater closed in the 1980’s, and was demolished in July 2006.

I lived behind the Food Giant market on the corner of Crenshaw and Imperial. I saw such gems as West Side Story and one of my noir favorites, Experiment in Terror there. In those days of my youth, I was fascinated by all things cinema along with theater arts at Morningside high school. I managed to make the acquaintance of the projectionist whose name was Clark. He let me watch as he made changeovers and we talked about projectors, sound systems and other theaters he had worked at. Does anyone know who the architect was? My memory is a bit fuzzy but I believe the interior was a maroon color with gray accents.

During the 1960’s time frame the theatre was part of the Statewide Theatres then Century Theatres then Loew’s Theatres and may have spent a short time as a GCC. When GCC bought Loew’s California theatre locations.

The former Imperial site has been redeveloped. I drove by that old abandoned theater many, many times.
http://tinyurl.com/3gkozx

The Imperial was within walking distance of my home during the 50s ,when I was a boy. The strip of businesses from Crenshaw to the theater I think was called Imperial Village. The Imperial Theater rarely showed sneak previews. But, one night it had a Gig Young movie as a sneak. Gig Young was there. I got to shake his hand. During this era, there was no Food Giant. That property was occupied by jack rabbits.

Advertised as the New Imperial in September 1973, per the LA Times.

Here is a 1984 photo. The city is misidentified as Hawthorne.
http://tinyurl.com/cez6mr

Boxoffice of July 31, 1948, said that Los Angeles architects Russell & Samaniego were preparing plans for a theater to be built by Griffith Enterprises on Imperial Highway in Inglewood. I’ve been unable to find the opening year for the Imperial, but the theater won an award for its signage from the Wagner Sign Company in 1950.

The partnership of architects George Vernon Russell and Eduardo J. Samaniego was in existence from 1946 to 1950. They designed at least one of the department stores that J.C. Penney was putting up in suburban business districts around Southern California during this period (the one at Van Nuys.) As those J.C. Penney stores all looked much alike, perhaps they designed others as well. I’ve been unable to discover if they designed any theaters other than the Imperial.

Russell was one of the architects of the Sunset Plaza shopping center (1934-1936) on the Sunset Strip, in collaboration with Charles Selkirk, who had been one of the architects of the Alex Theatre in Glendale. George Russell was also the original architect of the Flamingo Hotel in Las Vegas (1945), though he was ousted before the Flamingo was completed, when Bugsy Siegel took over the project from its originator, William Wilkerson.

Another interesting movie connection involving the Imperial is that the theater was taken over not long after it opened by Phil Isley, whose daughter was actress Jennifer Jones. Isley had cause to regret this attempt to break into the California market, as the Imperial and two other recently built luxury theaters he acquired there, the La Tijera and the California, lost more than a million dollars over a period of three years, according to an article (lower left corner) in Boxoffice of December 20, 1952.

The Imperial had a rather sketchy history, opening and closing several times under different operators. At least it survived as a theater longer than Isley’s La Tijera, which was converted into a bowling alley less than three years after it opened. I’ve been unable to identify the location of the third Isley house mentioned in the Boxoffice article, the California. Does anybody know which California Theatre it was?

Cliff Ray, Larry Barnett and myself got caught throwing stink bombs in this theater in 1962. A Lennox Police Sgt. placed me at a job as a fry cook at Carroll’s Drive In.

Moved to Inglewood from Ohio in 1955 and almost immediately got a job at the Imperial from Helm and Hoffman enterprises, who reopened the theater that summer. I have no recollection of how long it had been closed before that. Double features were 50 cents.