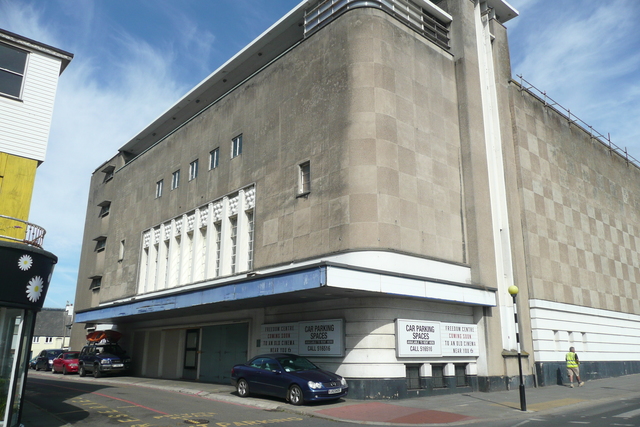 The Odeon Cinema, St. Helier in Jersey (one of the Channel Islands), was the first cinema to be designed and opened by Odeon Theatres Ltd. after World War II, opening on 2nd June 1952. The original seating capacity was for 1,360, later increased slightly to 1,373. The architectural firm T.P. Bennett & Son designed the building with a fresh 1950’s look. The exterior was clad in a chequer-board style in the panels which were attached to the walls. Seating was provided in the auditorium in stalls and circle levels.

In 2001, the Odeon was designated a site of ‘Special Scientific Interest’. The Odeon was closed on 7th October 2004 when a new Cineworld multiplex opened in St. Helier.

It was taken over by an independent operator and re-opened on 25th March 2005, re-named the New Forum Cinema. Soon known as the Forum Cinema, it billed itself as ‘Jersey’s Family Cinema’. It was closed on 15th January 2009.

It is a Listed building, but in late-2010, there were proposals to de-list the building in preperation for possible demolition. In 2014 it has been taken over by an evangelical church.

An undated photograph, most likely early-1970’s, of the Odeon St. Helier:
View link

There is an extensive history of the Odeon on this PDF document discussing the reasons for listing. View PDF

Paul can you forward me that PDF of the Odeon as the link no longer works Thank you. Bruce

Cultman, if you search for “odeon” on the Jersey Government website, that brings up many documents about the Odeon

The best is the “Price Report” – view the “Main text” PDF, alternately the other sections include many photos. http://www.gov.je/Government/Pages/StatesReports.aspx?ReportID=580

Thank you very much indeed. I am trying to find out whether this cinema was originally 70mm equipped in the 60s as I am unsure whether my parents took the family to see ‘My Fair Lady’ there in August 1965 or at another cinema? crazy I know but trying to write up my family’s heritage! Thank you!