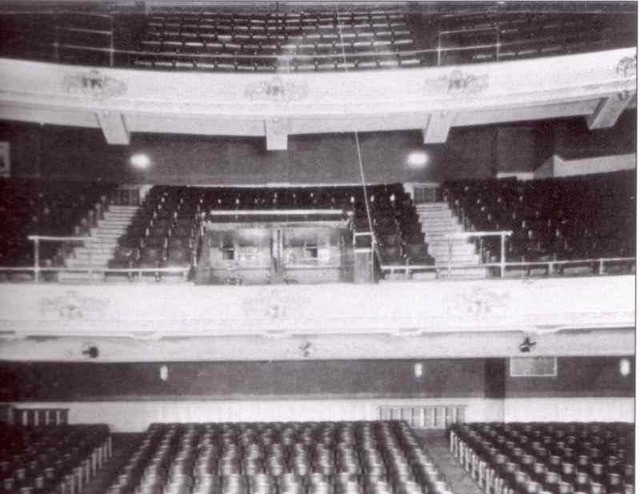 The Roanoke Theatre was opened December 25, 1911 with 5 acts of Keith vaudeville. It wnt over to movies and continued until at least 1950.

I got some great shots of this theater from Twig’s OLD ROANOKE website and directly from him.It had a double balcony and LOOKED bigger than the stated seating number.It looked magnifecent.I know it was gone by 1960.There was another real beauty very near on Campbell,the Academy.(or Music Academy?)

The Roanoke Theatre was listed at 14 Campbell Avenue SW in the 1915 Roanoke City Directory. I believe Roanoke later converted to the Philadelphia street numbering system, eliminating one and two-digit addresses, so the location was the same as the later 114 Campbell.

I’ve found references to the Roanoke Theatre as early as 1912, in a history of Roanoke County that listed the theater as being among several important buildings that had been built in recent years.

That is correct. That is the Academy of Music which was in the 400 block of Salem Ave.SW on the southside of the street. There is a parking lot there now and it’s about half way up the block between 4th & 5th streets. As far as I know, no movies played at this house. It was ONLY stage productions & had more of an auditorium look than a theater look inside to me but it was a nice looking place in older photos. Deep stage but not very wide.

The Roanoke Theater was at 14 Campbell Ave SW but the entrance was narrow and a Planter’s Peanut Store was in the same building which was a remolded three story building built about 1904. It wasn’t very wide. The box office was on the right hand side & after getting your ticket, you strolled by one sheets advertising the current movie & coming attractions including some stage productions which in the theater’s latter years was usually on Wednesday nights. Then though to doors with half moon glass in them and up a long ram to the lobby & ticket taker. You made a right angle turn to enter the downstairs of the actual theater which was built and opened in 1911. To the left of the concession stand was steps which led up to the restroom. If you continued and the rope which read “Balcony Closed” was not hooked, you went up to the balcony which featured box seats on both sides that could also be accessed from steps both right and left of the main floor box seats that you accessed from the downstairs (mainfloor) though a curtain next to the front side exit doors on the main floor. If one continued by the box seats the next door took you back stage both left and right of the stage.

Three digit addresses didn’t begin on Campbell Ave until one got to the next block west or east. Jefferson St was the dividing line between SW and SE and north of the train tracks just two blocks north on Jefferson St is where NW & NE divided. Anyway going west or east on Campbell Ave or Salem Ave, the first block had single & two digit addresses and in the next block it began 101 and up to the end of the block.

The American Theater which shared a wall with the Roanoke on Kirk Ave had it’s front on Jefferson St and it’s address was 212. The theater building had other stores including a restaurant & night club called the Raskeller so the actual theater building probably several addresses. The 18 story office building on the theater footprint today, I think is 214 or maybe 213.

So the Roanoke Theater which was really on Kirk Ave with it entrance and lobby in a older three story long but narrow older building was built and opened in 1911 and was closed by Elmore Hines in 1961 & torn down for a parking lot with the old front entrance building which included the lobby & stair that accessed the balcony was also torn down and the bank expanded even further down west Campbell Avenue. Some pictures of the Roanoke Theater entrance that date to the 1940’s and older, show that then the bank was not down to the theater entrance with a Thom McAnn shoe store and a lunch counter restaurant between the bank & the theater entrance which also included a Planters Peanut store with a mechanical Mr. Peanut moving back and forth striking a silver dollar taped to the window. So over the years, the bank at the corner of Jefferson & Campbell now known as Wells Fargo but originally First National Bank slowly kept taking more and more of the businesses on west Campbell Ave as it expanded further west.

The Rialto: 1920-1955 (razed in 1955) about 8 or 10 EAST Campbell Ave east of Jefferson St next to the Colonial American Bank building which is on the southeast corner of Jefferson and Campbell and build in 1927.

Elmore Hines operated the American, Roanoke, Park and Rialto and for a time before 1930, operated The Jefferson.

Hines also had a few 5cent small screens without balcony and stage in downtown Roanoke. One was The Princess in the 100 block of west Campbell Ave. And on the otherside of Kirk Ave from the American in the 300 block but on the same side of the street as The American; were The Comet, The Virginian and the Bijou all in a row & next door to each other. All of these theaters were actually Nickelodeians & all closed by 1930. I never saw them operating personally but one of Hines older employees who had been with him since about 1916, T. R. Emerson, told me about them and showed me where they were. I worked in The Jefferson, The American and The Roanoke and remember them inside and out very clearly even today. The Jefferson had about three face lifts inside and out and the last one hid the interesting faces at the top of each section that had a light fixture down the sides of the theater between the lobby and the stage/screen. One of those was saved and in a museum.

The Isis was in the same block as The Roanoke Theater entrance as were the Electric Parlor and The Lyric but I don’t think Hines ran those.

I uploaded an ad dated August 10, 1914. The ad states that the theatre will reopen after being closed for one week since 1911 for repairs. I would assume that means the Roanoke Theatre has been in operation since at least 1911.

I just posed an ad from Dec. 23, 1911 announcing a Christmas Day Opening of the Roanoke Theatre.

As I was mistaken about Roanoke having converted its street numbering system at some point (see lackey’s comment of July 15, 2012) the address of the Roanoke Theatre should be changed to 14 Campbell Avenue.