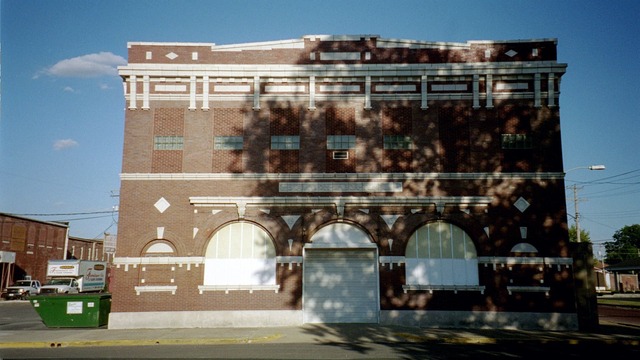 The Labor Temple Theater opened in 1914. It was built by the local Miner Union 755 and had a seating capacity of 800, all on a single floor. There were offices and meeting rooms and lodge places located on the second floor.

The Temple Theater was closed in late-1972 with the Walt Disney movie “Napoleon and Samantha”.

It is now in use as a furniture store warehouse, minus its marquee.

This was on Wood south of Main St.

I took a few photos of the Labor Temple on a trip through southern Illinois last year. Here’s one of them; others are nearby on my Flickr page!

The Labor Temple was built in 1914 by the Local Miners' Union. The front doors opened onto an attractive lobby with a wide stairway to the second floor on the right and a ticket office centered between two entrances to a large auditorium with a sloping floor, aisles between three sections of seats and a large stage. The theatre had the first air-conditioning system within thirty-five miles of Staunton. From Tuesday through Sunday it was a first-run theatre for years. The musical “Don’t Give Up the Ship” led to the Staunton High School fight song “Don’t Give Up the Fight”. On the first Monday of each month the miners held a union meeting there; other Mondays were available for graduations, dramatic or musical productions by local groups, lectures and so forth. Lavatories were upstairs as were several conference or committee meeting rooms and a large hall where lodges met and dances and receptions were held.

The 1921 Sanborn credits the theater with 782 seats, and notes 2 rows of iron columns, presumably holding up the second floor.