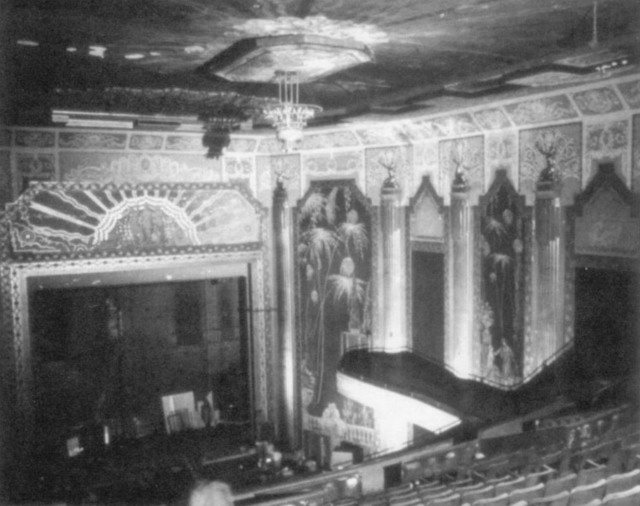 Opened on February 26, 1932 with Marlene Dietrich in “Shanghai Express”. The 1,797-seat Paramount Theater was the last of the great movie palaces erected on downtown Boston’s Washington Street, and the only one built exclusively for talking pictures. It was closed in 1976, and much of its interior detail was lost during asbestos removal in the 1980’s and decades of neglect and dereliction.

In 2002, Millennium Partners painstakingly restored the Paramount’s façade, marquee, and vertical sign. Millennium agreed to do this in exchange for city approval of their adjacent Ritz-Carlton Towers project (which included the new 19-screen Loews Boston Common (which has its own page on Cinema Treasures). The restored sign is occasionally lit up at night, and is a glorious sight to see. The derelict auditorium was demolished.

Emerson College has won much praise for its restoration of the nearby Cutler Majestic Theatre, so its involvement in the Paramount Theater is great news for Washington Street.

The Paramount Theater reopened as a performing arts center on March 6, 2010 and is now known as part of the Paramount Center. A new, main 590-seat theatre was created with Art Deco style splendour, with seating for 326 in the orchestra level and 264 in the balcony.

There appears to be a way to project film on the Paramount mainstage. Last night on New Year’s Eve (aka First Night 2011), the Paramount presented this event, which featured a live band accompanying thirteen Andy Warhol ‘Screen Test’ films. The films were black-and-white silents, shot in 16mm in Academy ratio (4x3).

Video showing Psycho at the Paramount (shortly before 6 minutes) http://www.youtube.com/watch?feature=player_embedded&v=DjRzj_Ufiew

The ABC-TV outlet in Boston, WCVB, Ch 5,has a long-time early evening program called “Chronical” which visits various places and areas in New England. On Monday Jan. 12, there was a 30-minute visit to the Boston Theatre District. However, they only covered one section of the district, centered on the Opera House on Washington Street. And somehow, after 15 minutes, the show wandered off-topic, and I actually fell asleep out of boredom during the last 5 minutes. Hey, “Chronical” staff, if you want viewers to come back, you’ve gotta do a better job than this! Some misinformation on the program: ### The Modern Theater was THE place to go for movies in Boston ### No, hardly. ### Your grandparents went to the Paramount to see the likes of Frank Sinatra and Benny Goodman perform ### No, there were no stage shows there. ### There is a secret passageway from the Paramount to the Opera House ###. Pure claptrap. The only passageway between the two theaters is the sidewalk out front. Who makes up these foolish stories??

My dad managed the Paramount for several years in the late 40’s and 50’s. I found this photo from 1953 taken in the lobby of the Paramount:

Dad also participated in the rededication of the Paramount Center in March 2010 at the age of 90. Here he is being interviewed at the event:

The interior was not restorable because the roof was almost non existent and most of the ceiling had fallen onto the floor. There was 3-4 feet of water in the basement and the asbestos removal was an excuse to demolish the rest of the interior that was still intact after years of vandalism and neglect. We were lucky the building was saved at all.

Yes, Direspaul is correct. Some people today are under the impression that the Paramount they see is the original building. The only parts of the building today which are original are the facade, including the marquee and vertical sign, plus several feet of the sidewalls and roof leading from the facade wall. All of the remainder was removed. The interior was in very poor condition after many years closed and not maintained.

How often does it need to be said that the Paramount project 10 years ago was not a restoration. Only the facade and marquee were restored; the remainder of the building was demolished. The theatre is new-construction, and the auditorium today looks nothing like the original. It definitely was not “restored to its former glory”, to use a cliche. I write this because I just today read a newspaper article which states that the Paramount has been “beautifully restored”. No, I don’t think so.