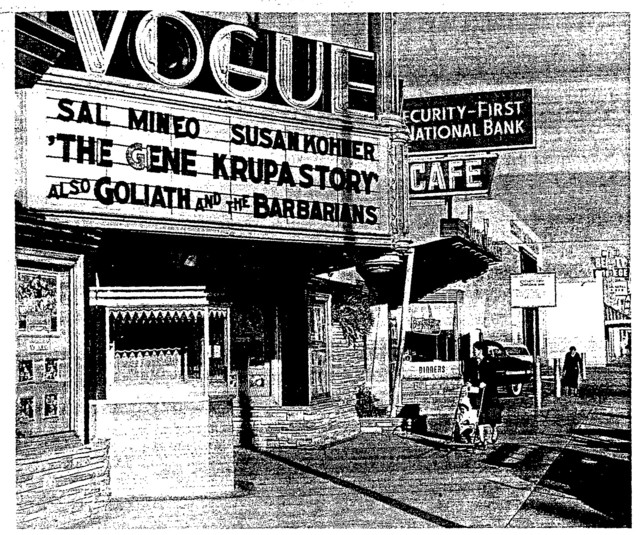 The Vogue Theatre was a small, rather plain cinema located in a remodeled commercial building in downtown Montebello. It operated from 1937 through the 1960’s. The Vogue was owned by Alfred Olander, for whom S. Charles Lee designed Montebello’s Garmar Theatre, opened in 1950. The Garmar showed first run movies, and the Vogue operated as a second run budget house.

In the early 1970’s the Vogue Theatre was remodeled and became the location of Montebello Travel Agency. As of 2008, the building is occupied by a hairdressing salon.

Google Maps Street View provides this photo of the Vogue’s building as it appears in 2008 (be patient while the picture loads- Google Maps' street view feature can be very slow at times.) The Los Angeles County Assessor’s office gives a construction date of 1929 for the building, which contains 4800 square feet, so completely covering its lot, which has dimensions of 40x120 feet.

The December 18, 1937, issue of Boxoffice Magazine has revealed that the Vogue was a bit older than I had thought. It carried a brief item saying that A.L. Olander’s New Vogue Theatre had opened on Tuesday, December 14. It also said that the decoration of the theater had been done by the Robert Powers Studio.

The last mention of the Vogue Theater that I can find in the LA Times movie listings is from June 11, 1966. The ad is for Mary Poppins. It just says: Vogue, Montebello PAI-1225

The first I could find is this: August 26, 1938 VOGUE MONTEBELLO “Fast Company” “Always Goodbye”

You can find many pictures of Montebello’s landmarks on this webpage:
View link

It was a Hudson Terraplane dealership before being renovated into the theatre.