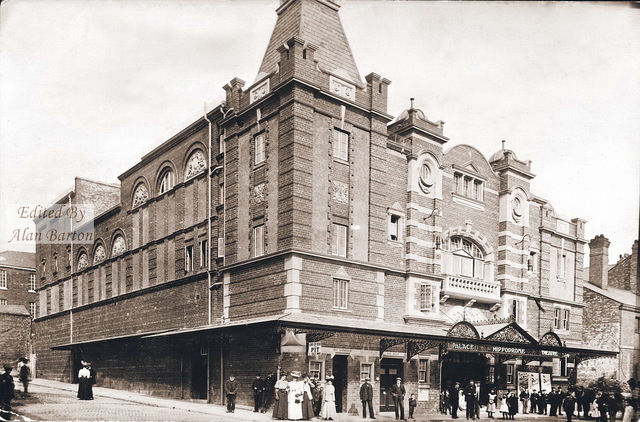 The Palace-Hippodrome Theatre opened on 23rd September 1907 and was part of the MacNaghten Vaudeville Circuit. The opening production featured John Tiller’s ‘High Jinks’ Company. Films were shown as part of the programme during the early years. Designed by architect George F. Ward, there were two balconies, a box on each side of the proscenium and Baroque style plasterwork. It was converted into the Palace Cinema in early-1931, opening with Ben Lyon in “Hell’s Angels”. The upper balcony wasn’t used when it was a cinema. Entrance to the small projection room was through a door at the side of the building. It was a long climb to the box, you got to it via the upper balcony. A fire in 1954 damaged the circle and upper balcony levels, but repairs were made and it re-opened as the New Palace Cinema. I was there as a young projectionist in 1964. The projectors were Fedi, the sound RCA and the carbon arcs Peerless Magnarc. Chief projectionist was a Mr Joe Slevin. Closed in 1957 when the MacNaghten Vaudeville Circuit ceased operation, it remained closed for 3 years.

It was purchased by the Hutchinson circuit in 1960 and re-opened with Shirley Jones in “Oklahoma”. The Palace Cinema closed on 7th November 1964 with the film “The Camp on Blood Island” starring Andre Morell.

The former Palace is now The Showbar after Brannigans closed. A fair amount of the theatre survives, mostly hidden away behind false floors and ceilings. The lower nightclub extends over the stage, but above this the stripped-out flytower survives.

Some photos from May 2013 here:– EXTERIOR