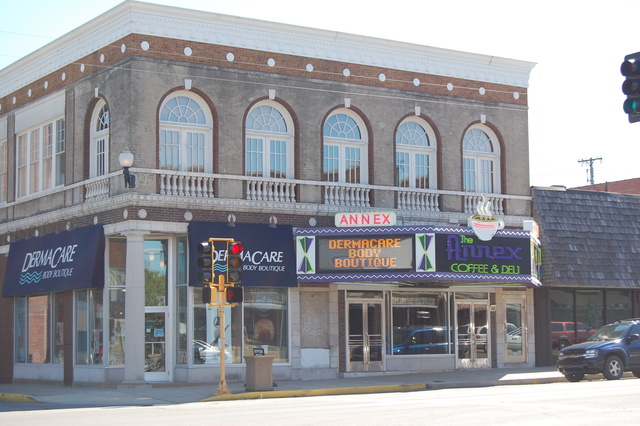 The Annex Theater building is currently used as a coffee shop and deli.

According to a book called “Williamson County Illinois Sesquicentennial History” the Annex Theatre was built behind the Hippodrome Theatre (later called the Marlow Theatre) specifically to show movies. It was operated by the same company that operated the Hippodrome/Marlow, which in its early years was a live stage house.

This photo shows the Annex “about 1912” according to the caption, but the original Hippodrome’s stage house is visible behind it, with part of the name Hippodrome visible, so the photo must date from after 1917.

The same photo gallery has additional photos of the Annex, one on the same page depicting a 1955 fire, another one on the next page showing the marquee in aside view (along with photos of two drive-ins, the Marlow and the Egyptian,) and there is also this photo of a snow-covered Park Avenue, with the Annex at left.

Boxoffice of May 12, 1956, carried an item headlined “Reopens at Herrin, Ill.” which said that the Annex had been damaged by fire the previous July.

Boxoffice of April 20, 1964, posted a brief obituary of John D. Marlow, who had died at Herrin on April 1. It said that he had operated Marlow’s Fireproof, Annex, and Drive-In theaters, all of which had been closed.