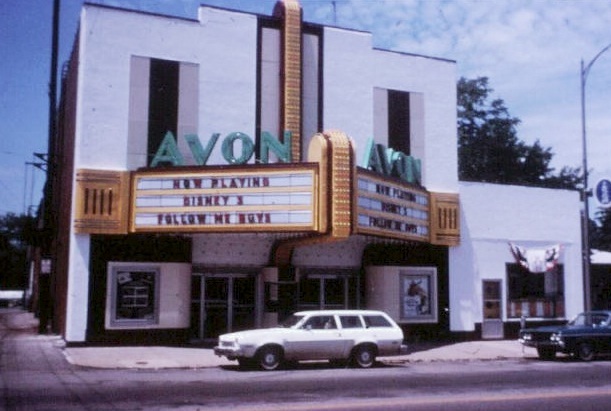 The Colonial Theatre was opened prior to 1926. Around 1939 it was renamed Avon Theatre. By 1950 it was operated by Affiliated Theaters Inc. out of Indianapolis, IN. It was still open in 1957.

Here is an undated photo:
http://tinyurl.com/y6hv4hj

If the address is correct, it appears it’s gone for good….

The name Colonial Theatre goes way back in Lebanon, but I don’t know if it was originally in the same building that became the Avon. Here is an item (somewhat belated, it appears) from the October 10, 1914, issue of The Moving Picture World:

“The Colonial, Lebanon, will move into the picture show auditorium made a part of the new Rural Loan Association building. The Colonial will be running in the new location before October 1.”

The November 7 issue of the same magazine had another item about the Colonial:

:“The New Colonial theater, Lebanon, Ind., will be reopened for business now soon. The work of remodeling and redecorating is about complete.”

From the two items, is sounds as though the theater might have temporarily occupied the auditorium of the Rural Loan Association building while its own building was being remodeled.

Another reference to the Colonial comes from the February 13, 1915, issue of Domestic Engineering:

“Clarence Miller, of Lebanon, recently finished the heating and plumbing in the two-story fireproof Colonial Theater building. This contract amounted to $1,100.”

The 1921 edition of Julius Cahn’s guide lists the Colonial Theatre at Lebanon as a 500-seat house with a rather small stage 20 feet by 21 feet. The guide says there were also two movie theaters at Lebanon, one playing vaudeville twice a week, but it doesn’t name them. The town’s population was 6,257 in 1920, so three theaters was not unreasonable.

The Colonial Theatre became the Avon Theatre in 1939, at that time seating was listed at 490.

The Colonial appears on the 1919 Sanborn. At this point, the front of the theater is a 2-story brick building, with the auditorium behind being slightly lower. The entrance address is 218, while 216 is a music store that takes up the southern half of the front. On the 1909 map, this lot is home to a boarding house.

I’m not sure where the Rural Loan Assoc. building was. There were several banks in the area around the square. Searching for it did turn up this great full-page ad for a 1917 show at the Colonial: https://newspapers.library.in.gov/cgi-bin/indiana?a=d&d=LDR19171020.1.5 It’s clear that at least up to 1917, the theater was also presenting vaudeville.

According to Indiana Memory, the Colonial Theatre was remodeled and renamed the Avon in 1936. The venerable house was still in operation when it was destroyed in a spectacular fire on February 26, 1999. In a photograph of the theater in flames, the marquee shows two titles: Payback and Message. The first was undoubtedly the Mel Gibson movie released that year, and the second was most likely Message in a Bottle, the Kevin Kostner-Robin Wright Penn romance. Since double features, especially of two recently released major titles, were very rare by 1999, I suspect the house had been twinned, though I don’t see any signage on the building indicating two screens.

As noted in my earlier comment, the Colonial Theatre was in operation by late 1914. The Colonial was not listed in the 1914-1915 American Motion Picture Directory, which listed only two movie houses at Lebanon: the Grand Opera House, 216-220 Main Street, and the Olympic Theatre, 122 S. Lebanon Street.