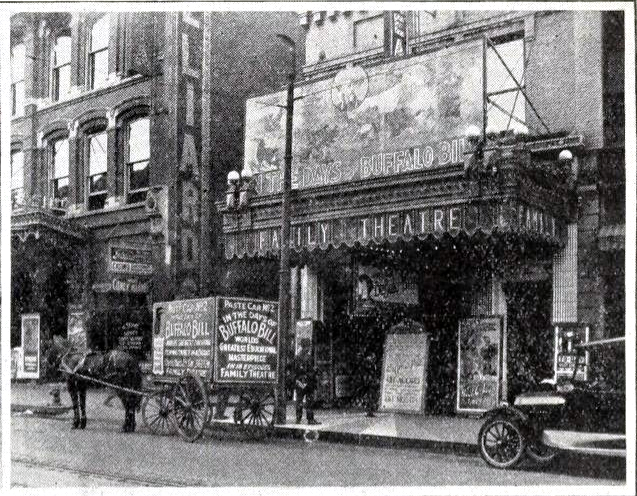 The Radium Theatre was opened May 30, 1907, but within months went out of business. New owners took over later that year and it reopened as the Family Theatre. Ate a ton of popcorn at the Family Theatre. It was basic, no balcony and always ran westerns, Laurel & Hardy, Disney and Lantz cartoons, and serials. Think Rogers, Autry and I saved the west there. Basic flat V-shaped sign with no vertical sign. It was on the east side of the alley that seperated it from the Casino Theatre.

In Bill Bryson’s paperback book “The Life and Times of the Thunderbolt Kid” is a photo of the Family Theater on page 2. I can’t read all the marquee but it says “DOPE INFERNO”, “SHAME”, “HORROR” and “DESPAIR”. I can’t read the title of the movie. Does anyone know what the title might be? Thanks, JH.

Opened as the Radium Theatre on May 30, 1907, the theatre went out of business within three months reopening on Thanksgiving of 1907 as the rebranded Family Theatre. Harry Hiersteiner ran the Family as an independent for 37 of the 46 years facing stiff competition from the major circuits.

But the TV age was unkind to the Locust Street theatres as the Garden/Rocket, Strand and Family closed consecutively. The final show for the Family was “Venus in Peek-a-Boo” September 13, 1953. Two months later, the struggling Grand Theatre would burn to the ground as Des Moines pre-palace era movie theaters continued their rapid descent.