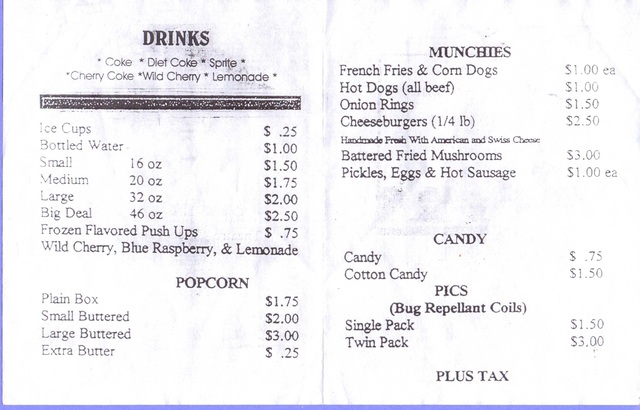 The Starlite Drive-In was the last of the giant dinosaur of drive-in theatres in the greater Triangle area that showed a variety of films while holding area flea market sales every weekend. The drive-in theatre opened June 9, 1948 with Merle Oberon in “A Night in Paradise”. It operated until March 2007, when it closed after the death of the Starlite’s owner, Bob Groves.

I’m 48 yrs old now but I remember when I was a teenager around 16 or so, going to Drive in movies in Wilson, NC & there was also one on Capital Blvd in Raleigh, & of course the Starlight Drive in Durham. Now there aren’t any Drive In’s in the Triange area! What a shame! Everything has become so commercial & controlled. Maybe someone will become adventurous & an outward thinker & open a new drive in movie for the Durham/Raleigh area. That person would surely become rich because I for one, would go! Especially if there’s good hot food & reasonable prices like the Starlight use to have!

The Wall Mart is one block north.The Starlite’s screen is gone but the projection booth-concession stand is still there. A flea market opened 4-2011

SHOWGIRLS played here at this drive-in theatre in early 1996. It was the only theatre that show it due to its controversial and graphically sexual content due to its “NC-17” rating.

This drive-in theatre was a victim to WAL-MART.

In its last years the Starlite Drive-in also operated as a video-rental club and a gun shop; VHS videotapes and firearms were displayed in the concession building.

It could be reopened again….You could show movies and still have the flea market.

Everything I have looked at shows this D-I still there minus its screen and ticket booth. Walmart is further north.

Drive-In 54, Kris4077, and jrwoman 10: The ONLY outdoor drive-in still in operation in the Triangle is in Henderson at the Raleigh Road Drive-In. Sad but true if you want to drive that far to see a movie at bargain prices.

And the sadder part is that section of North Durham is a wasteland. Nothing.

@ Raysson I attend the Raleigh Road Outdoor theater in Henderson from time to time. Of course I live over an hour away.