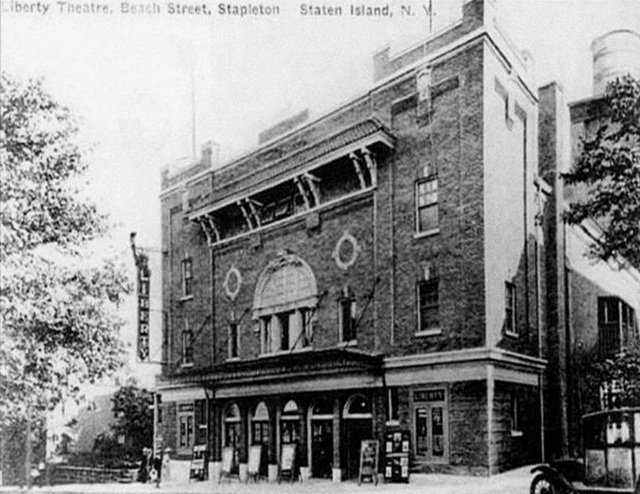 Located in the Stapleton district of Staten Island. The following information was taken from the December 26, 1999 edition of the Staten Island Advance:

Designed by architect James Whitford Snr., the Liberty Theatre was opened in 1918 by veteran showman Charles Moses on Beach Street in Stapleton.

The theatre offered plays and vaudeville on Sundays. 1919 was a gala year for this theatre, with a steady parade of such performers as Fred Allen, Victor Moore, George Raft, Sophie Tucker, Georgie Jessel and Ben Bernie. Moses and Johnson eventually added a reel of motion picture news events to their Sunday concerts and when vaudeville died out in the late-1920’s, motion pictures succeeded the stage shows.

It was closed in 1953 and later became a bowling alley and then a discotheque. It now serves as a church.

The building now houses a church… so, what ELSE is new?

i recall it was also a disco later on. the usual problems associated with a youthful clientel resulted in its demise.

Note:The red and blue painted wooden awning as seen in the main photograph above has now been removed.

I saw this the other day while biking by. It is right near the Paramount, which is under renovation (and the renovators let me go inside and have a look.) This theater has the banner out front that says “Holy Ghost Royal House of Restoration.”

After the bowling alley in the early 80’s a guy name Vince had a club there called PARK VILLA and later called ON STAGE. The homes to the rt used to be parking for the theater. I used to repair the sound system. The lighting and decor looked like a western version of studio 54. During Park Villa there was a mechanical Bull onstage and when people got drunk and daring they would ride and get throne off! The club ran for several years but after the happyland fire (bronx)the fire and police used to raid it too often. After Onstage closed Vince shortly past away. I had alot of good times working and drinking there. B.W.

I am glad it is a church and not a parking lot, like so many others have become.

Listings for the Liberty theatre ended in 1953 in the Staten Island Advance.