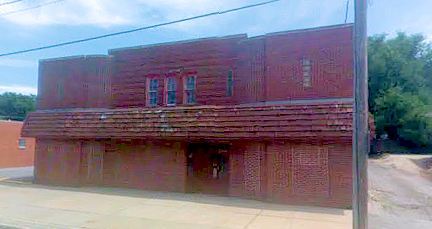 The Avalon Theater was a basic neighborhood theater. It had no balcony. The exterior was brick. After closing down in the mid-1940’s, it became a labor union hall.

A new Avalon Theatre was built at 2915 East Ninth Street in 1946, replacing an earlier and smaller Avalon Theatre at Ninth and Hull Avenue, just up the block. This was reported in Boxoffice of March 9, 1946. The address of 2965 East Ninth currently listed above must be for the old Avalon.

The new Avalon’s building was still standing and recognizable as a former theater when Google’s street view truck last rolled by it. The old Avalon’s building appears to have been replaced by another building.

I’m sure the old Avalon was demolished. The building on the corner of Ninth and Hull looks to be of about 1940s or 1950s vintage itself, and was apparently built as a store or small office building. It’s too small and low to have ever been a theater.

I’m unable to tell from the street view what is now in the new Avalon’s building, and I can’t find anything listed on the Internet for that address. It might have been vacant at the time Google’s truck went by.

Despite having the entrance walled in and one of those mini-mansards stuck on the front where the marquee would have been, it is still recognizable as a former theater and looks like it’s in fairly good condition. It just has that rather forlorn look that so much of Des Moines seems to have.

There’s still a conflict between two different theaters of the same name on this page. The original Avalon Theatre, at 2965 East Ninth Street (“East” is part of the street name and should not be abbreviated— in fact the street actually runs north and south) has been demolished.

The current description in the intro (aside from the reference to closing date and demolition) pertains to the second Avalon Theatre, which was opened in 1946 at 2915 East Ninth Street, and converted into a union hall some time later. I’ve been unable to find a closing year for it. This building is still standing.

Either the second Avalon should get its own page, or this page should be given to the second Avalon, with 2915 East Ninth Street as the address, “Closed” for Status, and “Unknown” for Function. The information that the current building was a replacement for the earlier Avalon up the block, which has been demolished, could then be added to the description.

A post at the web site Lost Cinemas of Greater Des Moines has a night shot of the second Avalon’s marquee which can be dated to 1954. See it here.