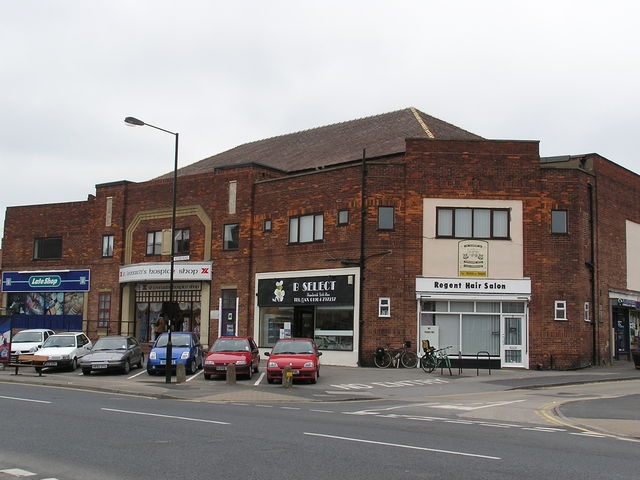 One of York’s suburban cinemas the Regent Cinema opened on 12th February 1934 with Maurice Chevalier in “"A Bedtime Story”. It is located in the Acomb district of the city. There were 899 seats in a stadium style with the stalls and raised stepped section at the rear. It was designed by local York architect Willam Arthur Kellet.

It closed on 4th April 1959, the third of the city’s cinemas to shutter due to the declining audiences, and was sub-divided inside into a number of retail outlets. The last film shown was "Sierra Baron". Until recently, when the Co-operative supermarket opened, the large unit on the left side was a furniture shop which used the the original stairs and had the balcony steppings on view in the upper showroom.

The main part of the cinema, previously used as 2nd hand furniture shop is now available to rent.

Both the St Leonard’s Hospice shop in the centre of the façade and the recently opened Cooperative supermarket to its left have penetrated the auditorium space although not entirely. The screen and minimal “stage house” were to the right, or York, end of the building. The light-coloured, triple section, chamferred arch which encloses the central entrance and first floor window above, reflected the identically shaped proscenium arch within. Living to the west of York, I was taken to the Regent once as a small boy but remember vividly a striking cinema. The screen curtains had an appliqued pattern comprising a large star or sunburst near the bottom with radiating “beams” which reached the top and sides of the proscenium. Stage lighting was red/green/blue footlights and the high standard of presentation resulted in spectacular effects. The film I saw was “Smiley Gets a Gun” starring Colin Peterson. The Regent’s closure was partly due to York’s Odeon and ABC Regal having the pick of the main circuit releases (as well as several other cinemas in the City centre) and partly due to badly behaved teenagers inside and vandalism around the cinema. Bicycles left anywhere near the building would risk having their tyres slashed, car windows would be broken regularly and gangs would congregate around the entrance. The loss was a great shame as the Regent was, technically and architecturally, superior to some of York’s older, though more central, cinemas.