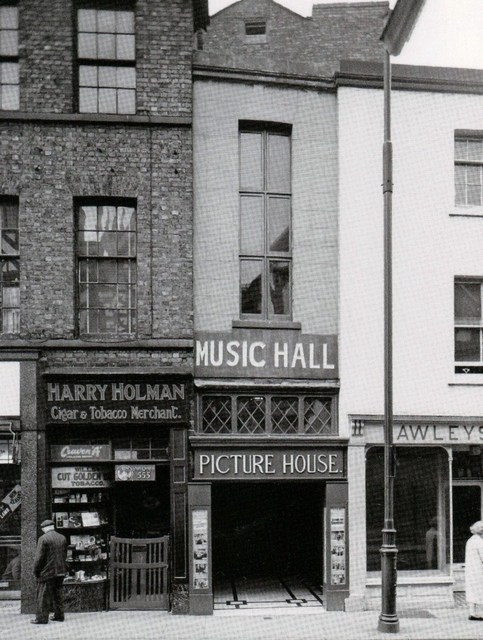 Originally built in 1280, by 1855 the upper part of the building had been used as the Theatre Royal was altered to become the Music Hall. It had entrances in both Northgate Street and St. Werberg Street, ran films from the early part of the twentieth century. This was on an occasional basis between lectures and concerts. In 1908 The London Animated Picture Company put in an appearance. Films were screened on a regular basis from 1915, when it was known as Music Hall Pictures. In 1921, a company called Chester Music Hall (1921) Ltd. had the hall reconstructed to the designs of architects E.J. Muspratt & George E. Tonge. It was decided to move the screen from the St. Werberg Street end to the Northgate Street end. Its first screening under the new management was "The Kid" starring Charlie Chaplin, which was shown in November 1921.

Chester’s first talkie "The Singing Fool, starring Al Jolson was screened from September 23rd 1929. This was of course using Warner Bros. Vitaphone sixteen inch discs. In later years, the cinema was run by General Theatres, part of Gaumont British. At the time of closing Kalee machines were projecting the images. Some time back I went into the old box with friends. It is now a store room. No Smoking signs can still be seen on the walls, painted in red. The fire shutters are still there and you can see where equipment had been. With me on the visit was Vincent Dunning, who was a projectionist there in the 1940’s and Gordon Potter, former chief of the Odeon, who sadly is no longer with us. Vincent talked about his operating days, telling us that the floor was always painted red - traces can be seen. He also showed us a black stripe around the wall, which he had put on over 60 years ago.

The Music Hall Cinema was closed by the Rank Organisation on 29th April 1961 with “Never on Sunday”. This was a fitting title as the the hall never opened on a Sunday. It became a Reject shop and is now in use as a Superdrug pharmacy store. The Northgate Street entrance has been re-built, but the St. Werberg Street entrance and façade remain original.

In 1921 the Orchestra under the leadership of Edgar Patchett was placed in a sunken platform at the foot of the screen. The screen had a gilt moulded surround. Projection at that time was provided by two Kalee Indomitable projectors with large diameter Dallmayer lenses.

For many years a Mr William Mulvey was the manager.He became manager in 1915. Before Edgar Patchett a piano was played by Bobby Williams.