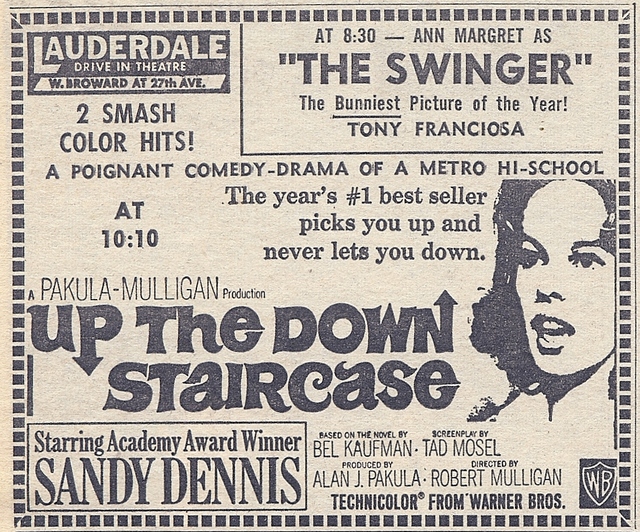 Located on W. Broward Boulevard at Wingate Road. The Fort Lauderdale Drive-In opened January 14, 1948 with Jeanne Craine in “Centennial Summer”. In 1955 it was operated by Phil C. Mathews & F.L. Stowe and was known as the Lauderdale Drive-In. It was closed in 1979.

Cool looking marquee!Whats a drive-in without a screen?

A Miami News ad in late November 1948 shows it was already in operation then and had possibly just opened.

My family regularly attended the Lauderdale Drive-In during the early 1960s, and it just happens that our church held early Sunday morning services there. I’ve just uploaded four pages of a 1963 tenth-anniversary program commemorating those services.

Naturally, I wish there were more pictures of the drive-in itself, but the last of the four pages does show a portion of the concession stand!

BTW, the drive-in was in the northwest corner of West Broward Blvd. and 27th Avenue — not Wingate Road.

Also, unfortunately, the status should be “demolished”.

Ran across the link and how exciting that this is actually trending!

My family opened this Drive-In in the mid 40’s…It was my grandfather who opened it and operated it until it was sold to Pen (Swap Shop) who defaulted on the deal, so my grandfather got it back and subsequently sold it to the county.

I remember many a weekend at the theater, folding popcorn boxes and watching movies. As a kid I was always excited about going to the property during the day to help my grandpa clean up from the night before and if I was lucky, I could take a tour of the concession.

It was truly a family operation. Everyone helped out at one time or the other.

My grandfather sold it (the first time) when I was in High School, so all my memories where when I was a kid.

I remember him telling me that he had to sell it because, frankly, the neighborhood around it became very run down and he was constantly subject to vandalism, break ins and occasionally a robbery.

I will see if I have any pics that I can share. Don’t sure I have any at all since nobody really thought to take pictures and pass them on. Both my grand father and my father have since passed, so a lot of the memorabilia has been lost in time.

Interesting fact, the actual screen remained on the property for some time after the Broward Sheriffs palace was built. I was always amazed that it was never torn down initially. I do not know when it was actually torn down though…..

Thank you! Would love to know the approximate time frame of the two sales, or at least the first one which you said was during your high school years.

Just looked back at my earlier comments and can’t believe I wrote northwest corner! It was the northeast. I have a topo map around here somewhere…

We lived just south of Davie Blvd. (I went to Stranahan), and the Lauderdale and Davie Blvd. drive-ins were our most frequented throughout the early and mid-1960s. Many wonderful memories of that time.

This opened on January 14th, 1948. Grand opening ad in the photo section.