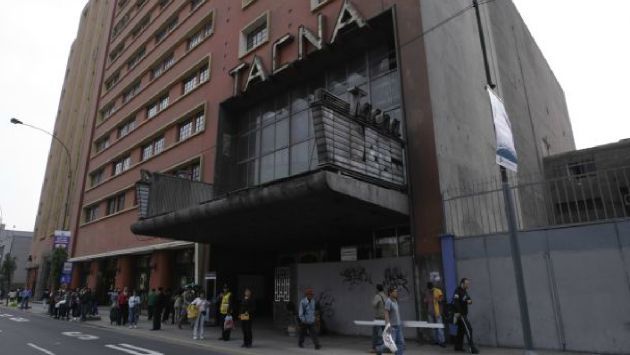 Located on one of the main avenues in Lima, the Cine Tacna was opened on 1st April 1948, with film star Ray Milland attending, together with the President of Peru and his wife. It had a modern design, with a seating capacity of 1,945 on three levels. There were 883 seats in the orchestra level, 405 de-luxe seats in an overhanging mezannine level and 657 in an overhanging balcony above. It was one of the largest cinemas to be built in the city. Built for and operated by Paramount International Theatres Corporation, it was the main cinema in Lima for showing Paramount Pictures.

Last used as a cinema for East Indian (Bollywood) films, it was closed in around 2006 and is currently ‘For Sale’ in 2008.

Some recent photographs of the Cine Tacna from January 2008:
http://perufotolibre.com/2008/01/cine-tacna.html

Here’s a night photo of Cine Tacna in a 1950 Boxoffice Magazine ad for the Pittsburgh Plate Glass Company</a>.