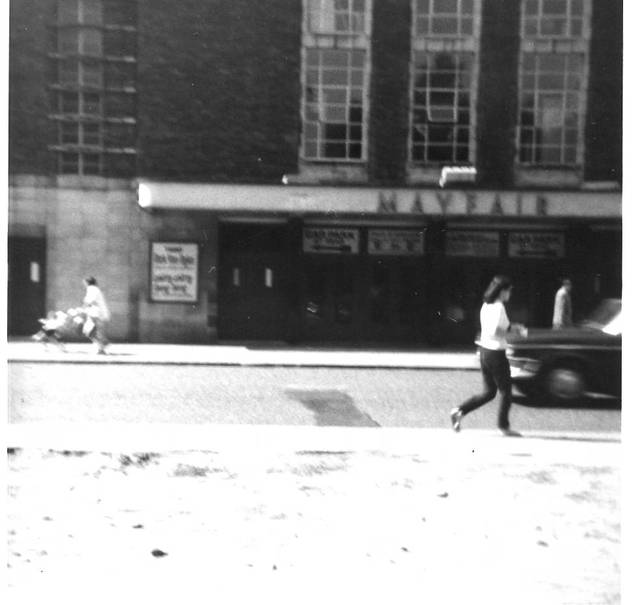 The Mayfair Theatre was located in the Aigburth district to the south of Liverpool city centre. It opened on 1st May 1937 with Max Miller in “Educating Evans”, and was one of Liverpool’s finest suburban cinemas.

The theatre was designed by A. Ernest Shennan and built by Tysons Ltd., with a spacious entrance hall that had the paybox in the middle. There were two staircases, which led to the balcony and large lounge, furnished with several couches. The auditorium had lighting in a coved ceiling, which stepped down to the screen. A Compton 3Manual/6Rank organ was opened by organist Sydney Gustard and regularly entertained patrons in the early years and was still played occasionally up to the time the cinema closed. The projection room had Kalee 11 projectors and Western Electric sound. At the time of closing the original projection heads were still in use. The cinema was equipped with four track magnetic, the last stereo film being “Woodstock”.

In 1969, the gold coloured festoon curtain was removed to make way for an unmasked screen. The new screen, minus tabs, appeared to be suspended in mid-air and was called a floating screen. This made its debut on August 3 1969. Later that year I joined as a second projectionist, my chief was Brian Cubbon. We ran single manned box, I only worked with Brian twice a week.

The last film was “The Last Picture Show”, a fitting title, plus Steve McQueen in “Bullet”. The final reel was shown on June 23rd 1973. The Mayfair Cinema then became a Mecca Bingo Club and was later demolished in 1984 and a Kwik Save Supermarket was built on the site.

Manager for many years was a Mr Tom Barnes, who had also worked at the Abbey Wavertree. Manager at the time of closing was a Mr Sam Bennett.

Very accurate description, David.
Just for the record, it was a Kwik Save, not a Tesco.

It was always just Mayfair, not Mayfair Super.
Here’s a 1982 photo:
View link