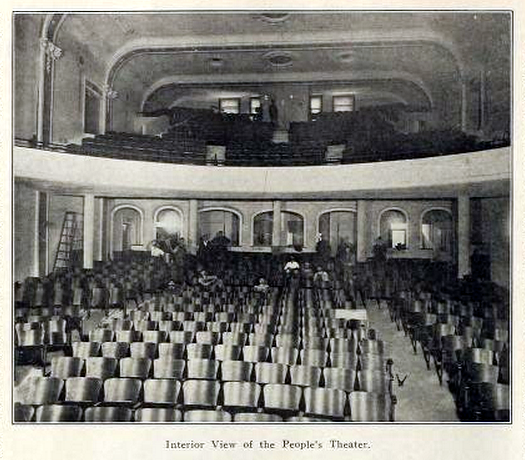 The Peoples Theatre opened in 1911. It was extensively rebuilt in 1929 to the plans of architects John Bennes and Herman Herzog and reopened as the Alder Theatre.

There probably was supposed to be a comma between the names, but the addition of “Street” appears to have been an error as well.

The aka should be Alder Theatre, like the tree the street was probably named after, not Adler.

The 1982 photo depicts the last Music Box Theatre in Portland, located on Broadway next door to the Fox Theatre. Gary Lacher and Steve Stone’s book “Theaters of Portland” says that there were six Portland theaters called the Music Box. I don’t think it has a page at Cinema Treasures yet.

The address listed is wrong. The Music Box was on Broadway at the corner of Yamhill street.

The address above is correct for an earlier Music Box, which operated in the Alder Street location from 1935 and probably through the 1950s. The Music Box on Broadway at Yamhill, which opened in late 1959 or early 1960, doesn’t yet have a page at Cinema Treasures.

Also here’s a correction to my comment of April 9, 2009. The last paragraph says that I thought the photo at the PSTOS web site was of Seattle, not Portland, but I now think it is indeed Portland, and it depicts an even earlier Music Box Theatre, listed at Cinema Treasures under its later name, the Liberty Theatre. That house was most likely the Music Box from the late 1920s until 1935, when the name was moved to this house, the former Alder Theatre.

The November 2, 1929, issue of Motion Picture News had an article about the remodeling of the Peoples Theatre and its reopening as the Alder Theatre. The People’s Theatre opened in 1911, and was owned by J. J. Parker. The 1929 rebuilding was extensive, involving the complete reconstruction of the balcony in order to remove columns on the first floor, and the moving of the entrance from the front of the building to the corner of 9th and Alder.

The rebuilding project was designed by the architectural firm of Bennes & Herzog, the same firm that designed the Hollywood Theatre.

Joe, thanks, the wrong photo has been removed as I sent in the request to the site masters.

The People’s Theatre, Portland Oregan is mentioned in Motion Picture World, February 2, 1918, page 714, saying the theatre “will have a new organ, a real one this time, with lots of reeds and everything that a first-class organ should have. It is a Robert-Morton instrument and is being built and installed by the American Foto-Player Company.”